Weapons of mass destruction: An excuse for West's interventions

By Fahad ur Rehman 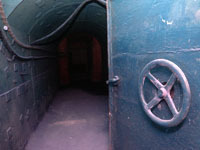 The weapons of mass destruction or the WMDs have remained a major issue of discussion since the post second world war era. During this era, only the U.S had nuclear weapons, thanks to its Manhattan project, whose earlier days went back to as far as 1930's when the initial stages of the project were in progress.

Ironically and quite astonishingly, America is also the first nation ever to use this destructive weapon of mass massacre on human race in the shape of bombings during the Second World War on Japanese cities of Hiroshima and Nagasaki.

Since then, the world has seen a race and strive between different nation states investing man and material into this deadly quest of nuclear weapons. After America, Soviet Union pronounced itself as a nation possessing considerable nuclear pinch. Henceforth, other major powers and influential international players like Britain, France and China joined the group of nations possessing nuclear warheads.

These five states also became the permanent members of Security Council of newly formed UN after the WWII holding veto powers. The main intent and objective of this organization which was to act as a watchdog and function as a body to curb escalating wars and conflicts among the nations of the world through peaceful methods of mediation and arbitration. However, realistically, the concentration of power in this new established organization fell into the sphere of Powerful Western nations. An axiom "Elephants can't be compared with squirrels" became popular in the international arena.

Moreover, in the post-Soviet Union disintegration scenario, the balance of power of the world was badly disturbed. Before that, countries with Marxist-communist tendencies such as Cuba, North Korea, Vietnam, and Eastern European states such as Yugoslavia were assisted morally, materially and at UN level by their Ideological predecessor, the Soviet Union. However, with the demise of their ideological forerunner, they had to either conform to the Western hegemony or become isolated in all respect of international associations such as; access to economic markets, influence in UN, international arms trade, and cultural exchanges.

So, it is in this background that the contemporary nations which are termed as axis of power should be viewed from. These nations do not want to integrate into international arena governed by the Western state system and the international state lacks another super power to adhere to in case of crisis with the U.S and Western dominated global order.

A classic case in point would be Iraq's situation, where the U.S first played the role of an assistant and provided patronage to the autocratic Saddam regime during Iraq-Iran War (1981-) albeit that the same ally when became defiant and dissident during the Gulf Crisis  of 1990-1991 in which Iraq invaded Kuwait due to territorial and oil quota issues, they were ruthlessly crushed and suppressed through a military offensive via a U.S led UN mandated assault to quell Iraqi forces from Kuwait. After the US led mission achieved their objective, they continued their pressure on Saddam Hussain even in the post-gulf crisis period and put the gulf country under harsh military and economic sanctions on the pretext of possessing chemical and biological weapons.

A long perpetual anecdote of sanctions and embargoes commenced since then. Saddam remained defiant and the world at large raised their concerns for the ordinary Iraqi's who were getting the worst from these sanctions. The prime objective to unseat Saddam from the palace became a personal vendetta for the U.S administration specially as their vested oil interests were at stake in the gulf region.

Engagement with the international nuclear watchdog, the IAEA (International Atomic Energy Agency), continued and halted with the passage of years until 2003, when the U.S and its Western alliance had it enough and decided the final assault to topple the daring Saddam to secure their oil interests within the region. They succeeded and the Iraqi President was finally found and tried for war crimes and atrocities committed to his own people and was executed in the same year through an U.S formed tribunal.

Here I would like to ask a question why the same Saddam was a blue eyed boy of the U.S during those earlier days? Where were the biological weapons which they were so earnest and keen to find and dump? If it was a mis-calculation, what can be the penalties for attacking and intervening in a sovereign state, which is also a member of United Nation. Why are the other great powers including the U.S never a part of the same nuclear scrutiny and accountability from IAEA when they have nuclear arsenals capable of destroying the whole world into ruins within a few minutes? They might be the signatory of the NPT (Non Proliferation Treaty) and NTBT (Nuclear Test Ban Treaty) but who spread the nuclear technology into the developing nations in the first place?

If our memory serves us right, it was due to the tug of war between the two super powers in the Post-WWII era that lead to nuclear escalation within the less developed countries each sharing the technology with their allies overtly and covertly. Furthermore, why is Israel never a part of the debate in this contentious and critical international issue? A widely proclaimed and generally acceptable nuclear state, are they enjoying the fruits of being the satellite state of U.S serving their interests in the Middle East? Why the double standards and interventions in the pretext of preemptive measures? One last question, will Iran, another pariah and defiant state in the Middle East that is headfast to carry on their nuclear program, also become a victim to same international agency paradoxes?

The highly interconnected global village in the midst of electronic and communication revolution is watching!