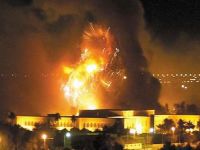 "Get some new lawyers." (1999: Then US Secretary of State Madeleine Albright to UK Foreign Secretary Robin Cook on his assertion that the bombing of Balkan States was illegal under international law*).

In this sixteenth anniversary year of Madeleine Albright stating her endorsement of half a million child sacrifices at the altar of the UN Embargo on Iraq as a "price worth it," this silent holocaust is to be commemorated annually.

In New Haven, Connecticut, on the 12th of May, marking the day of Albright's infamous broadcast (i) a banner was unfurled and a minute's silence held as the Middle East Crisis Committee, the Council on American-Islamic Relations (CT), the Tree of Life Education Fund and We Refuse to be Enemies, inaugurated the first Iraq Genocide Memorial Day.

Iraq's children, of course, continued to die at an average of six thousand a month until the illegal 2003 invasion wrought further apocalyptic disaster.  Currently, many hospitals are assessed as even more woeful than under the embargo, thus they continue to die in a near forgotten tragedy of UN-US-UK making. Soaring cancers and birth deformities linked to weapons used in the 1991 bombings, twelve years of subsequent bombings, 2003 and the following years have exacerbated and compounded a tragedy of enormity.

As others accused of crimes against humanity and crimes against the peace end up at the International Criminal Court (but so far, only if black or Eastern European, it seems) Albright gathers a bizarre collection of "humanitarian" awards.

One of the strangest is surely the Freedom Award from the International Rescue Committee, initiated by Albert Einstein which "responds to the world's worst humanitarian crises and helps people survive and rebuild their lives (offering) life saving care and life-changing assistance ..." Endorsing infanticide hardly falls within the IRC's lofty stated aspirations.

Two years after her statement on disposable children, Albright, now having abandoned further tarnishing the United Nations' fine founding aspirations, to become US Secretary of State, declared (February 1998) : "Iraq is a long way from (here), but what happens there matters a great deal here. For the risks that the leaders of a rogue state will use nuclear, chemical or biological weapons against us or our allies is the greatest security threat we face."

A year later, the 1999 razing of much of the Balkans became known as "Madeleine's war." The largely unrecognized nation of Kosova, carved from that decimation is now rated one of the most corrupt and lawless countries in the region and high in world ranking, according to December 2011 findings by Transparency International.

Talking after the virtual destruction of Iraq as a nation state, its records, government institutions bombed, looted, stolen, she told Jim Lehrer in September 2003: " ... I think we actually ... kept him (Saddam Hussein) in a strategic box. We bombed very much if you remember all the maps, always in terms of North and South -- covers a great portion of Iraq. I think we had him in the box." (iii) No mention that both the bombing and the "box" were comprehensively illegal.

As ever, the  majority of "bombed" victims were Iraq's children for whom her contempt was seemingly boundless: small rural shepherds and goat herders tending the family flocks on the vast flat tundra, with no place to hide.

One politician with whom she had sparred did take a stand in vast contrast. Robin Cook, Britain's Foreign Secretary, resigned in protest two days before the invasion. His resignation speech in Parliament on the 18th of March 2003 was a searing indictment of stark double standards on dealing with Iraq, deliberate selective perception which could now equally apply to threats to Iran:

"I have heard it said that Iraq has had not months but twelve years in which to complete disarmament, and that our patience is exhausted," he began.

"Yet it is more than thirty years since (UN) Resolution 242 called on Israel to withdraw from the occupied territories.

"We do not express the same impatience with the persistent refusal of Israel to comply."

He talked of " ... the strong sense of injustice throughout the Muslim world at what it sees as one rule for the allies of the US and another rule for the rest."

Britain's credibility was not "helped by the appearance that our partners in Washington are less interested in disarmament than they are in regime change in Iraq.

"That explains why any evidence that inspections may be showing progress is greeted in Washington not with satisfaction but with consternation: it reduces the case for war.

And as applies to Iran now, he pleaded that: "Inspections be given a chance (and that the UK was) "being pushed too quickly into conflict by a US Administration with an agenda of its own."

He asked for the halt of "commitment of troops in a war that has neither international agreement nor domestic support" and ended: "I intend to join those tomorrow night who will vote against military action. It is for that reason alone, and with a heavy heart, that I resign from the government." (iv)

On the first anniversary of the invasion, he stated in Parliament, "It seems only too likely that the judgement of history may be that the invasion of Iraq has been the biggest blunder in British foreign and security policy in the half century since Suez," he said.

"In truth we would have made more progress in rolling back support for terrorism if we had brought peace to Palestine rather than war to Iraq."

Robin Cook died of a heart complication whilst hill walking on remote Ben Stack in Scotland, coincidentally within a swathe of land owned by the Duke of Westminster, a Major General, and at the time Assistant Chief of Defence Staff, who visited British held Basra a number of times after the invasion.

His death was on the 6th of August, 2005, Hiroshima Day and the fifteenth anniversary of the imposition of the all denying embargo on Iraq. A price Robin Cook had clearly not thought "worth it."

It has to be hoped that Iraq Genocide Memorial Day spreads worldwide, both in memory of those abandoned by the inspiring words committed to in the UN Charter, the numerous hidden casualties, dead and alive, - and as a reminder that for a great swathe of the world, mortifyingly, it is the West which appears to be increasingly despotic.

Please also see: "The Children of Iraq ' Was the Price Worth it?"