Students in Chile take to the streets

More than 100,000 students return to the streets for education 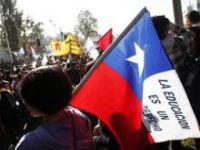 In Chile, a country with a per capita GDP of $16,000, the system repeats the educational and social inequalities of income distribution.

More than 100,000 Chilean students were mobilized, on Wednesday (16th), in Santiago and other cities to protest a broad education reform and tax. Young people, who in 2011 led a wave of 6,000 social protests, marched through several streets of the capital and various regions, repeating the scenario that brought down the popularity of President Sebastián Piñera 40 points last year. The president has only 24% support - the lowest since the return to democracy.

Students returned to ask for a free and quality higher education, and also demanded the reincorporation of secondary students expelled for participating in the protests last year.

"We will continue to rebel, we want to change everything and we will not stop until this system changes. (...)  We are marching not because we like to, but because we are convinced that education is a social right to be guaranteed by the state. We went to the streets with joy, but also to see with how much impotence, after a year of mobilization, we do not advance. Education in Chile segregates.  We must recover our capacity for outrage on this issue," Gabriel Boric, the president of the Federation of Chilean Students (ZIP), said to the crowd.

The university leader demanded the allocation of 5 million dollars for education and returned to question that in Chile most of the school and university education is administered by companies, and stressed that there are still secondary students who have had their registration canceled because of  participating in the student movement.

"We will not let you continue passing over us. We march because we have deep convictions: a tax reform that would redistribute the wealth of the country and not this agreement done in a setting for the rich, in order to finance a reform that understands education as a right," Boric said.

In Chile, a country with a per capita GDP of $16,000, the educational system repeats the social inequalities and the inequalities of income distribution.

The spokesman for the Chilean students said that the tax reform announced by the government as a means of funding for education is just a setting which will again benefit the wealthiest of Chile. "We ask for a tax reform that would redistribute the wealth throughout the country to get an education reform that conceives education as a universal social right," said Boric.

On average, poor Chilean youth, even up to 24 years, do not complete their school education and, by comparison, the richest get higher education. These results influence the lives of youth. Those who only finish secondary or high school, receive salaries of $600, while those with college degrees receive $2,500, according to government data.

The oposition, which governed Chile for 20 years, also suffers from citizen discontent, according to opinion polls.    The only one who escapes this bad evaluation is the former socialist president, Michelle Bachelet, who had more than 50% of preferences when asked who should be the next president of Chile.

Vermelho, with information from agencies