Bahrain to get US weapons

U.S. sells weapons to the Bahraini government, which has been oppressing the people more than 15 months... 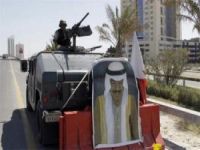 The United States reported on Friday that it will provide new equipment and services to the Bareiní military regime of Al Khalifa, everlasting dynasty that has repressed its people for about 15 months.

The Washington government has decided to resume arms sales to Baréin, which it was forced to suspend last October by the large protests in the small Gulf kingdom.

A statement from the U.S. State Department indicates that the weapons will be delivered to the Defence Forces, the Coast Guard and Baréin National Guard.

"For national security interests, we have decided to deliver more goods and services for the Baréin Defense Forces, the Coast Guard and National Guard to help Baréin maintain their ability for external defense," said State Department spokesman, Victoria Nuland.

At the same time, the text indicates that the TOW missiles and multipurpose military vehicles, known as Humvees, are "excluded" from the list of sales, and claims that the new sales "do not include" weapons to control the demonstrations, such as tear gas and blank dummy grenades.

However, Washington has acknowledged that in Baréin, "there are serious human rights issues" that have not been resolved.

"We made the decision to allow the sale of more items, knowing the fact that there are a number of serious unresolved human rights issues the Baréin Government needs to address," said Nuland.

Baréin is a U.S. ally in the strategic Persian Gulf region, home for more than 60 years to a U.S. naval headquarters in the area.

On 14 February 2011, revolution broke out in Baréin against the absolute power of Al Khalifa, inspired by popular revolutions against dictatorships unleashed in some countries of the Middle East and North Africa.

However, the Bareiní revolution has been and is brutally repressed by the forces loyal to the monarchy with direct help from Saudi Arabia, which occupied the island in March.