By Fahad ur Rehman 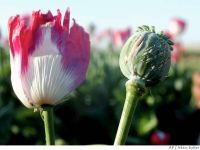 According to recent statistics, Afghanistan provides almost 90% of the world opium, it is presumed as a center of opium and poppy cultivation and the trade of these illicit drugs have become a global phenomenon now.

The situation since the post 9/11 scenario continues to deteriorate and this illegal but extraordinary form of economy make strides unabated. The presence of international security forces under the banner of NATO and ISAF have also failed to curb the rising concern of narcotics in different regions of Afghanistan.  (because NATO says counter-narcotics is not part of its mandate).

According to various commentators and analysts on Afghanistan, narcotics play a crucial role in the contemporary Afghan society and it impels a big influence on major political, social and economic realms of the country. Afghanistan has virtually turned into a narco-state and an enormous source of funding for militants, bureaucracy and officialdom.

Afghanistan's authorities claim that areas with little government access such as the Southern regions, specially the Helmand province, are central to cultivation and export of poppy and opium.  Helmand alone accounts for about 60% of the total Afghan poppy  produce.

Furthermore, they stated that this increasing trend of narcotics was not as widespread phenomenon as it is currently, and it was during the 1980's and the subsequent insurgencies, civil wars, and international and local engagements that has contributed and provided impetus to this illegal form of commerce.

Similarly General Abdul Wahed Taqat, a regional and military affairs  expert, alleges that international community is not honest and lacks the will when it comes to containing or confronting  drug mafias.  He says that the international security apparatus including intelligence agencies, on the contrary, indirectly support and promote drugs' lords through alliances in the name of security.

He claims that different anti-narcotics programs and operations are ludicrous and ironic  if viewed against the overwhelming majority of big mafias given patronage and protection while simultaneously small crops and small cultivators are seized and incarcerated respectively, which represents a small fish in the ocean of large sharks.

Astonishingly, the General further professed and said," detaining an individual who carries the drugs inside his body is comic while the other intelligence nets have their own airplanes to traffic narcotic."

What is more surprising is that narcotics cultivation and trafficking has shown a positive and progressing slope since the arrival of international troops in Afghanistan, a point that must raise much skepticism and incredulity among those circles who wishes to see a stable and prosperous Afghanistan including of course the Afghan people.

United Nations has got its own statistics, according to which currently narcotic trade forms 15% of impure production in Afghanistan. Based on present numbers there are around two million addicts in Afghanistan and it has been assessed the numbers would be increased.

Jawid Kohestani, a  military affairs expert alleged that narcotics cultivation and transit in Afghanistan have become an international affair now, and the intelligence networks operating in the region in collaboration with some Western countries are selling narcotics in European markets, and the trade is now a whooping $61billion phenomenon (The UN December, 2011Report).

Besides,  some 70% of this profit goes to the pockets of mafias. Many government officials and high profile political figures are supposedly involved in this business amidst which the negative effect is felt by the Afghanistan economy and the people. It is assumed that President Karzai's brothers were involved in this trade. Ahmad Wali Karzai, one of the brothers,  was reportedly killed by competitors in the lucrative trade.

A country which has been a victim of turmoil , civil wars and insurgency in response to the US-led Western occupation since post 9/11needs a clear framework and roadmap for post 2014 - when the bulk of the western troops pulls out of Afghanistan. It is not  necessary for containing militancy but also for the counter-narcotics campaign because both instability and drugs represent serious dangers to all the neighbouring  countries. Narcotic trafficking is one such issue which is playing horrendous role in undermining the dream of a peaceful, secure and stable Afghanistan. Drugs also threaten social peace.

And right now the most important source of  this trade are the western intelligence agencies led by the CIA; history suggests that CIA has been in unholy alliances with drugs mafias wherever it went - whether it was Columbia, Nicaragua, El Salvador, the Golden Triangle, or South East Asia - the Americans always partnered with drugs and criminal lords for peddling and promoting their geo-political objectives.