"Iran strongly rejects any U.S. plan in respect to Syria" 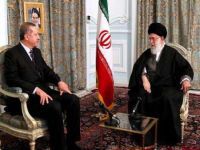 The Leader of the Islamic Republic of Iran, Ayatollah Ali Khamenei, announced on Thursday that his country outrightly rejects any U.S. plan on Syria.

During a meeting held with the Turkish Prime Minister, Recep Tayyip Erdogan, and his accompanying delegation, in the city of Mashhad (on northeastern Iranian territory), the supreme leader said Iran will defend Syria because the Arab country supports the line of Resistance to the Israeli regime, saying that Tehran strongly rejects any foreign intervention in the internal affairs of Syria.

According to Ayatollah Khamenei, Iran will continue to support reforms in Syria and declared that the reform process started in this country must take its course.

Iran's Supreme Leader stressed the need to deepen cooperation between Iran and Turkey and said that whenever the two countries jointly have supported something in various fields, they have benefited themselves and the Islamic world.

The Supreme Leader referred to the immense capacity to develop partnerships, especially in the oil and gas sector, and noted that Iran is considered a rich country, worldwide, for its extensive oil and gas resources.

He also addressed the sensitive conditions of the region and emphasized that, thank God, the events in the area have been in favor of Islam and Muslims, and will remain this way.

"In this circumstance, the most important issue is that independent countries make right decisions," he added.

Ayatollah Khamenei, referring to the instrumental use of the countries of the region by the world powers, especially the U.S., said that Americans do not accept the independence of any people, and have this attitude with all countries, therefore it is necessary to bear in mind the benefits of Islamic nations when making decisions.

On the other hand, he referred to the political power of the trends towards Islam in Turkey, and said that these conditions are not pleasant in any way to the West, especially the U.S., and while they are upset by this situation, the Islamic Republic of Iran is satisfied with the presence of their Muslim brothers in the power elite of Turkey.