Who profits from the shootings in France? 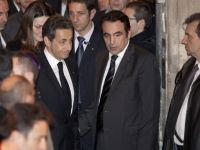 Voilà, another incident which has come just in time for the current French president to fill the mainstream media news, especially the TV screens of France, with his ubiquitous presence.  Tel Aviv and Washington seem to play their cards right. The timing is perfect. After the recent shooting of French parachutists is Montauban, now we have the new crime scene in Toulouse, with French children shot at a Jewish school.

Four weeks before the first round of the French presidential elections, Nicolas Sarkozy, best friend of the USA and Israel, gets the chance of lamenting Islamic "fundamentalism" in France, although the supposed culprit for the shootings has not even been captured yet.

But Sarkozy seems to be quite sure in advance that the man who shot in Montauban is the same who shot in Toulouse.

Sarkozy's publicly displayed grief for the Jewish victims gives him another possibility of commenting on anti-semitism in France and singing Israel's praise. Poor Israel, which is always threatened by the dangerous powers surrounding it, notably Syria and Iran.

Therefore Iran must be attacked as soon as possible, after the ousting of Syria's president Bashar al-Assad, which French secret services are currently trying to do.

Sarkozy's face, blown up "en toute grandeur", larger than life, beaming from a zillion photos, filling all the TV screens in France, what a wonderful possibility of getting some extra boost for the ailing, failing polls, all of it for free. It won't cost him a penny.

His favorite TV station, France 24, announces that "Nicolas Sarkozy is a politician who knows to follow the course of History," whatever that means. The French are masters of hollow bombast.

Some people whisper behind closed doors that the shootings in Montauban and Toulouse might be a minor 9/11, not planned and executed on such a grand scale, of course. But France is just a minor country, after all, when compared to Big Brother overseas.

CIA and MOSSAD come to mind, but nobody dares say it aloud. Speaking the truth may entail harmful consequences. The Europeans know that speaking up is risky. It is better to remain quiet if you want to be safe and keep your health intact.

The chase is on in Toulouse, the supposed culprit locked in his house, surrounded by police, and press people scurrying back and forth like scared mice, while Monsieur le President is ever-present, larger than life. He needn't even wear high heels to overcome his otherwise dwarflike stature.

Who profits from the crimes in Montauban and Toulouse? Honni soit qui mal y pense!

Defense Minister Longuet prepares the terrain, again on France 24: « Maybe we must watch more carefully all those coming from the exterior. » Which exterior? Syria or Israel? Iran or the USA?

At the ceremony for the victims of Montauban, Sarkozy rendered homage to the killed parachutists, presumably shot by the same man who shot the Jewish children in Toulouse.
Sarkozy forgot to mention in his pompous speech at Montauban that the parachutists were of Muslim Arab origin, at the service of France and its neo-colonial wars against Muslim brothers and sisters abroad.

Journalist Cyril Vanier, on France 24, commented that "the coffins of the victims will be sent to their families." He did not mention that these are Arab families, Moslems living in France.

Of course it is not opportune to shout out loud that these Muslim parachutists lost their lives in France and for France, when the government of Sarkozy begins his electoral propaganda against Moslems. What a sinister farce!

Sarkozy instead drums about "defending the values of France", whatever those might be, nobody exactly knows, these days. He drums on about "France having received an international mandate". By whom? To do what?

We can only suppose that this mandate was given by Washington and Tel Aviv to first destroy Syria, later Iran. In this "international mandate" France will keep genociding Muslim nations, leading proxy wars for Israel.

If he loses the elections, Sarkozy has promised to withdraw from politics. Let's hope that some clever Jewish real estate agent will sell him a nice beach house in Israel. Sarkozy might want to take his wife Carla and baby what's-its-name to withdraw to his beloved Israel forever after. What a relief!