After 20 years Algeria may see the repetition of the scenario of the early 1990s, when the Islamists achieved victory in parliamentary elections. The disparate fundamentalists of seven different movements united in a coalition that would challenge secular parties in the upcoming May 10 elections to the National People's Assembly. Ironically, most Russian media did not pay due attention to this very important point. 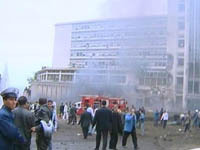 A key role in uniting Islamists is played by the Movement of Society for Peace (MSP) that, until recently, was part of the ruling coalition. This is not surprising since President Bouteflika made a bet on the country's national reconciliation by bringing the power of the most influential political forces, including moderate Islamists. The opponents of the secular regime in Algeria, despite losing the first round of the struggle in the 1990s, have not gone away. The most radical of them, like Madani, moved to Qatar and the United Kingdom, where they are trying to influence the political processes in the country

Others have accepted the offer of the authorities and chose to collaborate with them, but only temporarily. The pro-presidential alliance formed in 2004 that in addition to MSP included the Algerian National Liberation Front (FLN) and the the National Democratic Rally (RND), the Islamists obtained four ministerial portfolios of the 38 available. Even more notable was their representation in the National People's Assembly - 51 mandates out of 389.

On January 1, 2012 the ruling coalition fell apart: MSP left it. As stated by the leader of the movement Bouguerra, Soltani openly explained that "2012 will be the year of competition, not the year of alliances."

It was the first pre-election move for the Islamists. On January 6 general secretary of another Islamist party - "An-Nahda" - Fatih Rebiai openly invited all Islamist parties to unite and go to the elections as a united front. Credit must be given to the Islamists for forgetting their numerous personal ambitions and disagreements for the sake a common purpose - the struggle with the secular regime.

Interestingly, in this case, according to the official representative of MSP Madii Kamel, "MSP remains in the government, but is separating from the FLN and the NDA. MSP supports the President of Algeria, but it was not the parties that stripped the reforms of their meaning." Under this pretext, the Islamists have refused to surrender the obtained ministerial portfolios.

The Algerian authorities are in a difficult situation. Their representatives like Prime Minister and Ahmed Ouyahia can claim as much as they want that "Islamist revenge is impossible" because people still remember the bloody crimes of the fanatics of the 1990s.

Of course, the authorities tried to play it safe before the appearance on the horizon of the threatening "ghost of ISF" ("Islamic Salvation Front"), the organization that won the elections in 1992.

Back in December of 2011 they took to the Parliament a piece of legislation stating that movements and parties that include individuals who participated actively in the fight on the side of anti-government Islamists and created ISF, are not eligible for legalization and, accordingly, participation in the elections.

While this does not mean anything, of course, it evoked the anger of one of the founding fathers of the ISF Abbas Madani, who accused the Algerian authorities of being undemocratic. The surviving fighters against the Algerian regime may well choose a different strategy: to hide behind their young followers and conduct their policy remaining "behind the scenes".

Indeed, the very Islamist idea in Algeria has never suffered a strategic defeat. ISF and the Armed Islamic Group and Salafist preaching of jihad that came to replace it lost only the first round of the fight. Now the Islamists that took guises that in every election, even during the last 10 years of "stability," secured three million votes, are ready for revenge. Even their opponents admit that the Algerian Islamic alliance can secure 35-40 percent of the vote. However, participants stated that their results will be much higher.

Indeed, over the past few years the country's younger generation has grown up. On the one hand, they do not remember those events, on the other hand, many Algerians do not consider only radical Islamists guilty. After all, everyone knows that in an atmosphere of a bloody civil war no one can be hundred percent right. Besides, the Algerian government in the dashing 1990s did not display a great humanism towards the opposition. Islamists, not without success, blame them in organizing punitive raids on disloyal to the regime in rural areas.

Now, fundamentalists, winged by the events in Egypt, Tunisia and Libya, have decided to collect the fruits of the "Arab Spring" in Algeria. So far, the authorities, according to the opposition, managed to get away with massive fraud. But can this be done now, in times of crisis, and despite the fact that the elections will be watched by too many eyes?