Argentina prevents crossings originating from the Malvinas from mooring in Ushuaia...Measure takes place amid escalating tension on the islands in the dispute between Britain and Argentina... 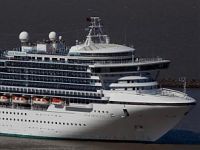 Two cruise ships carrying some 3,000 passengers had to turn around and leave the Argentine port of Ushuaia after having passed the Falkland Islands (Malvinas). The Star Princess and Adonia vessels passed through the region known as Tierra del Fuego and were forbidden to dock at the port.

The decision, considered alarming by British authorities, was based on the application of a law that refers to the conflict between the governments of Argentina and Britain regarding sovereignty over the Malvinas (Falklands). The standard prohibits "permanence, anchoring or supply and logistics operations in the province by vessels with the British flag."

A spokesman for the British Foreign Ministry said the country's diplomats in Argentina will ask for explanations on the measure, which affected the cruises of the "Adonia" and "Star Princess" of the Carnival Cruise Lines Company, which on Saturday had called at the disputed islands in the South Atlantic.

"We are very concerned after hearing that access was denied to the port of Ushuaia to the Adonia and the Star Princess, according to a source from the British Foreign Ministry." There is no justification for interference in free and legitimate commerce" he added.

The Adonia now sails towards Punta Arenas, Chile, next stop on a cruise of 87 days, which according to the company, started in England in January 13. But the Star Princess, which has capacity for 2,600 people and is 289 meters in length, will continue their cruise that began last January 7th from Valparaiso, in Chile.

Port authorities of Ushuaia gave P & O, a subsidiary of Carnival, which runs trips with both vessels, the reason for the prohibition as due to the fact that the vessels had previously been in the Malvinas Islands.

In December, Argentina and other Mercosul countries agreed to block access to ships with the flag of the Malvinas approaching their ports. The United Kinfdom expressed concern with the decision. "We are very concerned about this attempt by Argentina to isolate the population of the Falkland Islands (British appellation of the Malvinas) and harming their livelihoods, which has no justification," said British Foreign Ministry.

The littoral countries of Mercosul - Brazil, Argentina and Uruguay - agreed to the measure at the summit of the block, in Montevideo on December 20. A statement signed by the leaders of the bloc states that the three countries (Paraguay is landlocked) shall take "all necessary measures (...) to prevent entry into their ports of illegal ships with the flag of the Malvinas Islands."

The text points out that vessels rejected for this reason in any port in the region "cannot request entry into other ports of the other members of Mercosul or Associated States."

Also on this Monday, the WikiLeaks website revealed through the Spanish newspaper, El País, that the Brazilian government wants the British to stay away from the Malvinas and its oil reserves.

Tension: Argentina accuses the United Kingdom of sending a nuclear submarine to the Malvinas

In a dialogue between intelligence analysts of the intelligence company, Stratfor, it is clear that Brazil is disposed to supporting regional neighbors on the argument for the islands due to their interest in oil exploration in the region. The conversation had taken place after the announcement that oil companies like Petrobras, Repsol-YPF and Pan American Energy would drill in Argentine waters near the islands in April 2009.

Leaders of member countries of the Union of South American Nations (UNASUL) were invited for the ceremony of the 30th anniversary of the landing of Argentine troops on the disputed islands, on the 2nd of April. The ceremony anticipates bringing together authorities and veterans for a parade in Ushuaia, the city that Argentina considers to be the capital of the Malvinas.

The sovereignty of the Malvinas (Falklands for Britain), located 400 miles from the coast of Argentina and occupied by the United Kingdom in 1833, has been insistently claimed by Buenos Aires to the United Nations and other international organizations.

Britain won the short and bloody war in the Malvinas in 1982, declared after the Argentine military regime sent troops to invade the islands on April 2, 1982. On June 14, the Argentine forces surrendered after the deaths of 649 Argentine soldiers and 255 British soldiers.