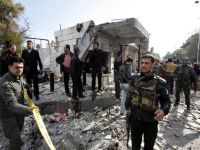 How many countries are going to look like this due to terrorists?

"The individual is handicapped by coming face to face with a conspiracy so monstrous he cannot believe it exists." (J.EdgarHoover, 1895-1972.)

Smelt any proverbial rats, lately? If not, you have not been paying attention, there are plenty about.

Consider for instance this: "Assad must halt his campaign of killing and crimes against his own people now" and "must step aside ..." Hilary Clinton (Asia Times, 9th February 2012.)

"I strongly condemn the Syrian government's unspeakable assault ... and I offer my deepest sympathy to those who have lost loved ones. Assad must halt his campaign of killing and crimes against his own people now. He must step aside ..." said President Barack Hussein Obama. (i)

Yet responsibility for US victims, in their hundreds of thousands, spanning Afghanistan, Iraq, Libya, Yemen, Somalia, in Guantanamo, Bagram, Abu Ghraib and elsewhere, are wholly unaccountable - and uncounted..

Responsibility for tyrannicide (including the horrific, state sponsored assassinations of Osama bin Laden and others, Libya's Head of State, Colonel Quaddafi, have, seemingly entered a Presidential memory hole.)

"This (Syria's) is a doomed regime as well as a murdering regime. There is no way it can get its credibility back either internationally or with its own people," Britain's little Foreign Secretary, William Hague, chimed in obediently, from the Washington script, on Sky News.

"Because the regime is so intransigent, because it is conducting ten months unmitigated violence and repression - more than 6,000 killed, with 12,000 or 14,000 in detention and subject to every kind of torture and abuse - it is driving some opponents to violent action themselves," concluded Hague.

Of Libya, in March 2011, Obama stated: "Going forward, we will continue to send a clear message: The violence must stop. Muammar Gaddafi has lost legitimacy to lead, and he must leave. Those who perpetrate violence against the Libyan people will be held accountable. And the aspirations of the Libyan people for freedom, democracy and dignity must be met."(ii.)

An anomaly (apart from the script similarity): In Afghanistan, Iraq, Libya, deaths resulting from US-UK and "allied" actions are: "impossible to verify", by Washington and Whitehall.

Indeed, this month, the (UK) Parliamentary Select Committee on Defence, issued a Report, after an Inquiry into operations in Libya, stating that: "Britain has no way of knowing how many civilians died in the Libyan conflict as a result of Nato bombing." (iii)

Back in March 2011, however, the exact figure of Quaddafi's victims was "known." Coincidentally, it was also exactly 6,000, stated a "political analyst" - using remarkably State Department-similar phraseology.(iv)

As under Saddam Hussein in Iraq (with no diplomatic presence) in Libya and now little in Syria - with no point of contact bar, seemingly, a satellite dish fitter, in Coventry, England, alleged to be the "Syrian Observatory for Human Rights" - exact death and casualty figures are always miraculously available.

A new nemesis appears on the horizon - or "Arab street"- and precise numbers are trumpeted. Yet when Western forces, "Viceroys," "Intelligence" services, "mentors" and myriad, general meddlers, mercenaries and marauders pitch up, murder and occupy, none are available.

Of course no proposed invasion (sorry, "humanitarian intervention") regime change and accompanying mass slayings would be complete without forces of a wicked tyrant switching off electricity to babies' incubators.

For anyone who has forgotten the details, the (1990-1991) Iraq model went like this: a vast US government employed PR agency, Hill and Knowlton ("we create value by shaping conversations: we start them, we amplify them, we change them. We can connect seamlessly with all of your audiences...") produced a fifteen year old girl called "Nayirah," a "Kuwaiti with first hand knowledge of ... her tortured land."

"I volunteered (tears) at the Al Addan Hospital .. I saw the Iraqi soldiers ..with guns, they took fifteen babies out of incubators, left them on the cold floor and took the incubators."

Strangely, no one asked why she didn't pick them up and wrap and tend to them, or checked who she really was.

She was the daughter of Saud al Sabar, the Kuwaiti Ambassador to the US. The incubators story of course, was a complete fabrication.

October 10th, 1990, Amnesty presented evidence against Iraq with Hill and Knowlton at the Congressional Human Rights Caucus on Capitol Hill. Amnesty International trustingly endorsed the incubator story. Apparently never investigating who "Nayirah" was, and in a charged situation, whether propaganda might not be rampant.

"Amnesty US Executive Director, John Healey, compounded the incubator baby story in testimony to the House Committee on Foreign Affairs on 8th.January 1991. The carpet-bombing of Iraq began nine days later."(v)

Amnesty, enjoined by Human Rights Watch, are amongst the most enthusiastic champions of Syrian intervention and onward to Armageddon. Glen Ford writes all you ever need to know.(vi)

The first Syria incubator baby story surfaced last August. "Syrian government troops" had cut the electricity. It was quickly exposed as beyond questionable.(vii)

Another one came up on 8th February (viii) with numbers varying from eighteen poor mites, to a subsequent eighty. With both tales, as the Iraq version, no distraught parents or extended families were found, no funeral gatherings. Then the stories, too, quietly vanished.

Coincidentally, the current Speaker of the eighty-eight Member Arab Inter-Parliamentary union, which backs intervention in Syria, is Kuwaiti, Ali Al-Salem Al-Dekbas, calling for all Syria's Ambassadors to be expelled, confrontation with Russia over her stance - and in remarkable US-speak, for swift intervention, to stop the Syrian government "killing (their own) people." (Reuters, 4th February 2012.)

She: "... has launched several campaigns against Iran, Libya and Syria."(viii)

The allegation that Kuwait gave Amnesty $500,000 for backing the Iraq incubator baby story has never gone away. But the little island, famously once called:"An oil company posing as a state," with a population of just 2,595,628 (July 2011) including 1,291,354 non-nationals, also has powerful American-proxy clout.

In 1999, an agreement was signed between the USA and Kuwait for a permanent US force to be stationed there in twelve facilities (there are a further eight "spares," seemingly not currently in use.)

The agreement for the bases, incidentally, was named: "Operation Desert Spring."(x)

Here is a further coincidence. In March 2010, Libya was voted, near unanimously, on to the UN Human Rights Committee, after a glowing Report on human rights progress. After a ferocious campaign by Geneva-based UN Watch (xi) not only were they expelled from it, but nineteen months later, their country lay in ruins, their leader lynched and most of his family dead.

Last November, Syria was elected to the Committee and the fifty-eight Member Arab board added their votes to the country's place on UNESCO panels.

UN Watch railed that: "Western democracies, unanimously elected Syria to a pair of Committees - one dealing directly with human rights issues - even as the Bashar al-Assad regime maintains its campaign of violence against its own citizens." Syria's Committee places, as Libya before it, died a death.

Amnesty's Ms Nossel, unsurprisingly, has spoken at a number of events with UN Watch Director, Hillel Neuer, a Montreal born attorney, whose career has included serving as a judicial law clerk for Justice Itzhak Zamir, at the Supreme Court of Israel.

In March last year, there seemed a glimmer of hope that the US and "allies" would back away from repeating the tragic disaster that was unfolding in Libya - and that had already struck Afghanistan and Iraq.

Secretary of State Clinton committed on CBS (27th March 2011) that the US would not intervene in the way it had in Libya.

Now, it seems, a miracle is needed, as it emerges that Saudi Arabia and Quatar are among those subsidizing insurgents with vast sums - as French Foreign Minister Alain Juppe announced that the EU is about to further tie the government's hands, by freezing the assets of the Syrian Central Bank, from 27th February. Syria is already under a crippling raft of sanctions.(xii) France was, of course, one of the leading and most enthusiastic cheerleaders for the destruction of Libya.

At the same "Friends of Syria" Conference in Tunis (24th February 2012) UK Foreign Minister William Hague declared that the UK recognized the insurgents and Hilary "We came, we saw, he died" Clinton called Russia and China: "despicable" for their veto at the UN, which may well have blocked further "intervention."

The US said it will consider military assistance to the insurgents - a representative of them said they were already receiving "western aid." With "friends" like these, Syria certainly needs no enemies.

The US has, of course, "despicably" vetoed thirty-five UN peace Resolutions relating to the Middle East (xiii) including on "Operation Cast Lead," the 2008-2009 Israeli Christmas-New Year onslaught on Gaza, and Israel's 2006 blitzkrieg of Lebanon.

Chillingly, no outrage or cries of "despicable" have been given to Israeli Prime Minister Benjamin Netanyahu's statement, in Switzerland, the day before the Tunisia conference, that there: "would be no Lebanon in the new world map."(xiv)

He stated, further, that an Israeli strike against Lebanon would be supported by the United States and Gulf States countries.

There surely is a wildlife park of elephants in the room. Given George W. Bush's "Crusade," the belief by extreme right Israeli circles in their control of the Middle East: "from the Nile to the Euphrates" and General Wesley Clark's revelations of 2007, that the Pentagon planned: "(taking) out seven countries in five years, starting with Iraq, and then Syria, Lebanon, Libya, Somalia, Sudan and, finishing off, Iran." There is an obvious question, sparked by Prime Minister Netanyahu's confidence over a Lebanon attack: Are these AIPAC and Israel's wars?