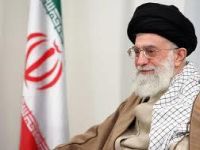 Iran's supreme leader, Ayatollah Ali Khamenei, said that this country will resist the aggressions and attacks of their enemies and will continue working for their technological development, despite pressure and sanctions from western powers.

Iran's premiere channel in Spanish for the first time showed that in spite of an official campaign, during his second sermon on Fridays in Tehran, the most spiritual guide of the Islamic Revolution emphasized that this process "would never deter our advancement because it is on the right path."

He stressed that from the birth of the Islamic Republic in 1979, the enemy imperialist nations sought to prevent the country's progress, but Iranians "were able to overcome all obstacles."

"No pressure managed to put the revolution on its knees and we will continue our march with a strong resolution. We will illustrate our points with ample social services, progress in several areas and the continuing strong stand against our enemies."

Khamenei affirmed that U.S. threats are a sign of their failure against the discourse of the Islamic Republic. "That's why the Americans have to resort to force," he said.

The head of the Iranian ayatollahs resisted statements of U.S. public servants in Washington to the effect that in the Iranian case "all options are on the table."

In this regard, he remarked that "a threat of war would be to their own disadvantage to the United States, the war would go 10 times against the interests of those same Americans."

On the other hand, he pointed out that the will of Allah is based on the awakening of other nations, Khamenei said that Iran could handle the situation to overcome all the challenges that have faced its revolution in 33 years.

He indicated that the present century belongs to Islam and to the nations, and it will affect the fate of all humanity. He then denied allegations of Iranian interference in the internal affairs of Bahrain, which violently repressed the Shia opposition.