Libya Update: Libyans will not submit

News of the Libyan resistance: 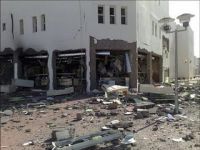 All not well in NATO torture terrorist land

The National Transitional Council (NTC), Al Qaeda and other NATO backed terrorists are unable to subdue the country. Not only are they incapable of running a country or government, but they can't even agree among themselves and they are eating each other alive.

No matter how many US troops are poured into the country, nothing is going to change the situation in Libya. This was no "Arab Spring" popular revolt as portrayed in the western corporate media, it was a clear cut case of a foreign intervention/invasion in order to steal the country's resources.

The first order of business has always been to secure the oil fields, as well as the financial sector. That is why representatives from the FUKUS-Axis (France, UK, US, Israel) were already in Benghazi at the end of 2011.

Gaddafi knew it was game on and knew there were traitors in his government. Did he have them hanged? No he did not.

What the west fails to understand is the unique relationship among Libyans and their army and the fact that the Libyan people themselves were and are the true government of this country. It is called the Jamahiriya, Government by people's councils.

Any advances made by the west and their terrorist stooges are only temporary, the situation is fluid and changes on a daily basis.

The Green Resistance, formerly the Libyan Army, controls most of the country and every day, more and more areas are going Green.

It is very true that an army must become one with the people and that such an army will always be invincible in the end. At every opportunity, the Green Resistance, unlike the NATO installed terrorists, take the time and trouble to look after the needs of the Libyan people. No matter how difficult the fight, this remains true.

Here are some of our frontline reports, which you will not find in the corporate bought western lying media:

Libyan resistance in Sirte killed NATO rat commander Jamal Al Sharif, who was stationed in the southern region of the city of Sirte.

The resistance destroyed 8 small, heavily armed trucks and 11 cars and 8 prisoners in Sirte were released

Armed groups fired rockets and heavy machine guns, 50 km from the town of Gharyan to the south of the capital, Tripoli

Explosions rocked Tripoli, Janzour and the road to the airport in the destruction of stores of the rebels

University students in Tarhunah hoist the green flag and chanted slogans of God, Muammar and Libya.

Hatba-Sharkia sixth night in a row is completely under the control of the Green Resistance.

The resistance has been informed that at the Al-Mehari is a system of satellite monitoring (wiretapping and tracking), telephone calls, which covers an area of the capital and suburbs.

Blocking the street, "1 September" protestors. People say that they were driven out of refineries. They not only lost their jobs, but now all the refineries are controlled by NATO, and made a strange deal.

In Gargur the explosion of a grenade, destroying a vehicle with weapons of bandits. Half an hour before explosions and gunshots were heard.

Detachment of the Resistance "Winter Hawks' largest base of militants attacked Misurata in Tripoli, as well as in object Gargur. 7 rats were killed and several wounded.

In the area of Tajura, an inscription "The people want to return to the Colonel."

As Al Fatami on Sunday pamphlets were spread through the city announcing the expulsion of the 'rats', as the population identifies the fifth column in the service of transnational oil companies. The statement also reported the growth of the popular uprising in nearby villages and called everyone to add up against the invaders and to mobilize in defense of the sovereignty of Libya.

Explosion of a grenade on junta-rats military camp in Abv Salim, by brave green soldiers of resistence at Aby Salim.

SGP introduces a state of emergency in parts of Abu Salim, Ain Zara (auto explosion, three rats were killed), Al-Furdzhan. "The threat of attacks on important targets in these areas - the maximum." Squads of rats contract to these areas.

Aisha will create the new Libya and liberate the country. He added that the people of Bani Walid told France Presse that the Libyan leader is alive in the hearts of Bani Walid
Dr Touhami, said a student in the department of literature at Sabha, tore the flag of shame in front of everyone and has put his name on the list of those expelled in the table of the Student Union and she's torn. He commended the heroic gesture.

He added that Bouchen (MustaphaAbdeljalil) will never live in peace in Libya. Whoever sold con honor, his country and brought the enemy in Libya.

He added that a release of CNT talking about 40 million Libyan dinars was stolen by a group of four people in the administration of the CNT.

He added that Musptapha Abdeljalil asked the Libyans to boycott Al Jazeera and Arabia!

As can be seen, the Green Resistance is going strong. It cannot, will not be stopped or defeated until all of Libya is liberated from NATO terror and domination.

Meanwhile, NATO hopes to repeat the horror of Libya in Syria, as they cotinue to train and dump more armed terrorists into Syria in the arrogant expectation of forcing the Assad government out.

Their stooges in the Arab League decided, as a result of having gone in to assess the situation in Syria, to attempt to dictate to the people of Syria about its internal matters.

Meanwhile the multi-prong effort against the Islamic Republic of Iran continues, while Iran not only offers talks, but has welcomed an IAEA inspection group into the country, hoping for a fair and balanced assessment.