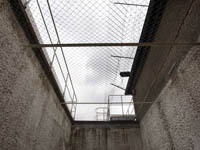 Hundreds of prisoners organized a desperate action of protest in Kyrgyzstan. The inmates mutilated themselves under patriotic slogans. Officials say that the action was organized by criminal kingpins, who demand so-called open cells in prisons.

In the meantime, officials with the State Service for the Execution of Punishment of Kyrgyzstan say that the situation is far from being dramatic. The night in Kyrgyz prisons and colonies, where the action of protest took place, was quiet. "The number of inmates, who stitched up their mouths in Kyrgyz prisons, has not increased," officials said. "The situation at penitentiary institutions is quiet despite various rumors that appeared earlier," they added.

"On Tuesday night, 385 inmates took part in the protest action at the central detention station of the Kyrgyz capital, Bishkek. However, three people refused from the action and requestion protection against the criminal community. They were transferred to closed cells," officials said.

"The majority of inmates did not want to mutilate themselves, but they had to do so because they were concerned about their own lives. Criminal kingpins forced many to take part in the action - they stitched their mouths in cells," officials said.

As many as 271 people asked for medical help at the hospital of the central detention center of Bishkek. Forty-eight of them had their mouths stitched. All of them said that they were concerned about the fact that the government did not show any reaction to their action.

According to the State Service for the Execution of Punishment, the inmates demand at least one "open" or "common" cell be arranged in each penitentiary institution of the country. The inmates staying at such cells have an opportunity to move to other cells.

In the event the authorities do not meet the requirements, the inmates say that they will attract their relatives and friends. The latter will either start to stitch up their mouths in public or go on hungerstrike near the buildings of the parliament and the government.