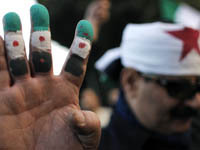 In the last few days the situation in Syria has become aggravated. Against the background of the traditional turmoil in the north, in Idlib, insurgents in the south have become more active. The other day, according to several news agencies, the militants seized the Damascus suburb of Duma. However, apparently, it was only a raid after which they quickly retreated.

Yet, there is more to it: back on January 13, 2011 Syrian opposition fighters seized strategically important town of Zabadani located on the Lebanese border, 40 kilometers from the Syrian capital. Similar to Damascus, it is situated on the river Barad, the only source of water supply in the area. The attempts to get it back have failed. Having acknowledged the loss of several armored vehicles, the troops of Assad retreated to their original positions, explaining that they were asked to do so by local elders who do not want to subject it to destruction.

However, there is another theory: the army stopped the assault of Zabadani because militants located there have threatened to blow up the water supply system in Damascus and other neighboring towns. Meanwhile, the Army tightly surrounded Zabadani and is waiting for an order to assault.

Against the backdrop of this aggravation foreign ministers of the League of Arab States (LAS) suggested that Syrian President Bashar Assad leaves according to "Yemen scheme," handing over power to his first deputy, as well as creating a "government of national unity", which should restore security and stability and hold early parliamentary and presidential elections.

However, in contrast to Saleh, it seems that no one intends to provide Assad with warranties, as the draft document prepared by LAS states that a national unity government should establish "an independent commission to investigate crimes committed against the citizens of Syria by Assad's regime during protests". Note that parliamentary elections to be held in Syria will be expedited and LAS will not be participating.
One gets the impression that someone does not want them to take place. Indeed, in this case, the Assad regime will gain greater legitimacy, and therefore, the actions of his detractors in all available languages ​​will qualify as sheer aggression against Syria. Of course, the Syrian authorities have strongly rejected this "mediation."

Thus, the work of observers from the Arab League in Syria has yielded nearly zero practical result, since the Assad regime was immune to the pressure exerted on its Arab neighbors. The failure of the LAS can be used to apply other instruments of pressure against Damascus. Shortly before this the Qatari Emir al-Thani called on the troops of the Arab countries to enter the territory of Syria.

However, the practical realization of this scenario is questionable. At first glance, Egypt is the only country that has a real military force, but, in the situation of the current revolutionary turmoil and uncertain outcome of the confrontation between the radicals and the military it is unlikely to engage in a foreign conflict.

However, we should not forget about the Arabic monarchical alliance (Morocco, Jordan and the Gulf countries), capable of playing a significant role in solving the Syrian issue under certain circumstances. But will this be enough to topple the current government in Syria? In order to guarantee the results, greater support is needed.

Here is another interesting moment: many have noticed the touching unity in the information war waged against al-Assad and coordinated from the Wahhabi Qatar and Saudi Arabia, the West and Israel. It is noteworthy that on January 18 in an interview with "Al-Hayat," a prominent representative of the Syrian "Muslim Brotherhood" Tayfur Farooq said that the "Muslim Brotherhood" has agreed to solve the problem of the Israeli-occupied Golan Heights. He added that they would adhere to the principles of the Camp David agreement and were ready to provide security for Israel.

In other words, Syrian opponents of Assad seek support from outside. However, the direct participation of Israel in the aggression against Syria is so far questionable. Despite the aggressive tone of the statements of many Israeli military and politicians with regard to Syria, Israel is unlikely to undertake the main mission in the destruction of the Assad regime without guaranteed help of the West and Turkey.

In addition, if the latter continues to behave as if nothing happens, external aggression may not even be necessary. Instead of taking harsh measures to restore order in the troubled areas infested with terrorists, for example, Homs, the authorities are in a state confusion, giving battle to their opponents.

It is time for Assad to declare a state of siege in Syria to restore order and stop looking back at someone's opinion, portraying himself as a liberal. At least in this case he still has a chance to survive, which is getting slimmer every day.