Libyan rebels to attack the West with uranium 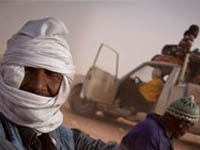 On January 18 in the north-eastern Mali, near the village of Menaka not far from the border with Niger, fighting between Tuareg rebels and government army troops has resumed. The Tuaregs, who fought on the side of Muammar Gaddafi in the fall of 2011, after the defeat began returning to Sahel, specifically Mali and Niger.

They were joined by the Tuaregs who lived in Libya, fearing genocide by the radicals. The overthrow of Gaddafi, who had been protecting the Tuareg virtually from the moment of his rise to power, significantly exacerbated the Tuareg issue that has been ongoing for over a decade.

The Tuaregs live on the territory of a number of countries of Maghreb and Sahel: Algeria, Burkina Faso, Libya, Mali, Niger and Chad. According to various sources, their number ranges between 1.5 to 5.5 million. The important thing is that, historically, they were natural-born warriors, who were conquered by the French in colonial expansion only in 1923.

The Tuareg issue has been generated by the colonial division. Before leaving, the French divided their territory (which the Tuareg call Azavad) among several, often artificially created, states.

Of course, the Tuaregs, most of whom have historically been nomads, do not recognize the artificial boundaries in the Sahara and constantly violate them. But there is more to it. Tuaregs have been oppressed and considered a despised minority in the most countries of residence.

Since 1990, they have been conducting an armed struggle against the governments of several African countries such as Mali and Niger. Through the mediation of Algeria and especially Libya, so far these conflicts have been mitigated. The Tuareg were grateful to the Colonel for his assistance, and hundreds of their members served him faithfully. In 1973 he actually saved them during the disastrous drought and provided them with shelter and food.

In addition, tens of thousands of Tuaregs found their shelter near him after a series of conflicts in Mali, Niger and Chad. Before the attack of NATO at Libya at least two thousand Tuaregs served in the Libyan troops, many of them - in the elite "Pan-African Legion." Some rose to the rank of general. Gaddafi skillfully played the Tuareg card in his own interests within the country, relying on them, and in building his influence in the neighboring states.

For example, he proposed the idea of ​​a federation "Big Sahara", where the rights of the Tuareg were to be taken into account. Most of the Tuareg chiefs supported this idea. However, the neighboring countries, including Algeria, were not particularly enthusiastic about the plans of building Libyan influence.

Now, after the overthrow of Gaddafi who had a huge impact on the Tuareg, it will be much more difficult to do. Especially considering that many of the Tuareg are united in the Popular Movement for the Liberation of Azavada (NDOA).

It should be noted that the authorities in Sahel prepared for a possible aggravation. Since late August, when some of the Tuareg groups that have received weapons from Gaddafi began returning home, the question was what to do with them. It was clear that, having received additional weapons, sooner or later they will try to get their way.

On August 26, Malian Tuareg leader Ibrahim ag-Bahanga was killed under mysterious circumstances. He was considered one of the most radical representatives of the movement of the Tuareg who refused to accept a peace agreement in 2006 and organized a new uprising in 2007.

It is noteworthy that ag-Bahanga received his military education from Gaddafi. He was one of the main proponents of uniting the Tuareg. Their "Alliance Tuareg Niger-Mali" (ATNM) was headed by ag-Bahanga's relative - Hama ar Sid Ahmed. Ag Bahanga was also one of the leaders of the Popular Movement Azavada.

Who would benefit from the elimination of this person? Both the authorities of Mali and representatives of the "Al-Qaeda Maghreb," who tried to take matters into their own hands. For the latter, he was a dangerous rival. However, his elimination did not result in the disruption of the Tuareg movements. Now, after strengthening of both the Tuareg and the Islamists with the Libyan weapons, the situation for the authorities in the Sahel has aggravated.

However, the worsening of Tuareg issue may bring the most significant problems to the West and commodity companies. The mining of uranium in Niger, one of the major suppliers of this strategic raw material to France, was under the control of French institutions. In the recent years Chinese companies have been actively penetrating this market. In 2007, the area of ​​uranium mining in Agadez has become the scene of hostilities, as the Tuareg demanded "equitable redistribution of resources," and no one can vouch for the fact that the Chinese will not use the Tuareg issue in their own interests.

In the end it is bound to happen sooner or later. Especially because the Tuaregs have previously been seen attacking Westerners. Will the Tuareg issue be solved without the mediation of Gaddafi?