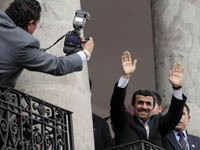 Ahmadinejad does not have many friends in the world. All of them, except for Syria, are in Latin America. Suffice it to say that it was his fifth visit to the region since 2007. Iran's friendship with ALBA states (the bloc incudes the above-mentioned countries) is based on common anti-American views and the fund of $200 billion, which was established to struggle against the American imperialism.

According to The Miami Herald, Ahmadinejad embarked on the Latin American tour to raise his authority inside the country against the background of the loss of the support from the spiritual leader Ayatollah Khamenei. The author of the article  also said that Iranian reformers had become more active in Iran recently. It is not clear, though, where exactly the journalist found reformers in the totalitarian state.

As a matter of fact, the Iranian president enjoys high popularity in his country. It will be impossible for the Americans to find the fifth column there. The nuclear program has become the national idea of the country. The Iranians have a special holiday about it on their calendar. People come to the streets to express their protest against the United States. They all remember the Iranian-Iraqi war, when the USA supported Iraq and sold chemical weapons to it.

What was the point of Mahmoud Ahmadinejad's visit to Latin America?

First and foremost, it goes about the pragmatic question. The Iranian leader toured Latin America to coordinate Iran's actions with the OPEC  (Venezuela, Ecuador and Iran are OPEC members) and look for closer cooperation in the energy industry. Perhaps, it does not go about only oil. Venezuela, Bolivia and Cuba may supposedly produce uranium for Iranian nuclear research. The countries may also ship the nuclear fuel to Iran via third countries. The information about it appeared in a secret report prepared by Israeli Foreign Ministry.

The political motivation of the tour is a very intriguing subject too. According to publications in the Western media, Iran was looking for support in Latin America to avoid international isolation and find approval to its nuclear program there.

First and foremost, there is no isolation. Libya has taught a lesson to Russia and China. However, US President Barack Obama introduced sanctions against those, who wanted to do trade with Iran. Secondly, Iran does not have to look for support in Latin America just because the country already has it.

"The Iranians have a vision of themselves of being a global power, and they feel that they have the momentum," says Roger Noriega, a Republican foreign policy hawk who headed the U.S. State Department's Latin American affairs office during the George W. Bush presidency.

"They feel that they blocked the U.S. presence in Iraq, they are angling to undermine the U.S. agreement with Afghanistan, and they want to challenge us in our neighborhood," he adds.

Indeed, there is a challenge: "You go to the Middle East, and we go to your backyard."

The scale of the competition is incomparable, of course. However, the Americans are still concerned. U.S. House Foreign Relations Committee chairwoman Ileana Ros-Lehtinen, R-Miami labeled Ahmadinejad's trip "the tour of tyrants."

"The growing alliances between Iran and anti-American dictatorships in the Western Hemisphere pose a serious threat to democracy and stability in the region. The recent revelation that the Consul General at Venezuela's Miami office was engaged in illicit activities with the Iranian regime shows that these ties are active and growing," she said.

According to The Washington Post, Ahmadinejad tries to set up elite units of the Iranian Revolutionary Guards known as Al Quds. The newspaper refers to those troops as a "terrorist group" which would be capable of organizing another 9/11 in the USA in return to a possible attack against the nuclear objects of Iran. The publication claims that it was Iranian special services that organized the explosions at Jewish public organizations in Argentina in 1992.

The reasons for the anti-Iranian hysteria in the United States are easy to understand. Barack Obama signed a new defense strategy on December 31, 2011. The strategy names the Asian-Pacific region and the Middle East a priority strategy region of defense presence. Figuratively speaking, Ahmadinejad is like a dangerous wolf for the United States. He is not like Hugo Chavez, whom the US treats like a gnat.

As for Latin American publications, all of them pointed out one interesting detail about all this. The Iranian President did not visit Brazil. Indeed, not so long ago, Brazil was actively supporting Iran. The country even offered its own variant for solving the problems of the Iranian nuclear problem. However, all that was during the time when Lula da Silva was Brazil's President.

His successor, Dilma Rousseff,  takes a pragmatic position. Brazil's Estadao newspaper wrote that the whole country took a breath of relief after it became known that Ahmadinejad was not going to visit the country during his trip. However, Brazil should not disregard Iran as a partner, who acts as an important exporter of Brazilian meat.

Brazil does not want to cooperate with Iran much. Brazil's key trade partner is the USA, not Iran. In addition, Brazil would like not to annoy the US administration that has just lifted a duty for the import of Brazilian ethanol - an important constituent of Brazilian export. Other countries of Latin America prefer to mind their business for similar reasons.

As for the members of the ALBA bloc, they are not afraid of the USA. Foreign Minister of Ecuador, Ricardo Paltino, stated that Ecuador, being a sovereign state, would continue to support its ties with Iran depending on its own interests. Ecuador is not going to follow any instructions or recommendations from the US State Department.

ALBA leaders set out their certainty in the peaceful character of the Iranian nuclear program. They also pointed out the hypocrisy of the Western countries, who condemn Iran supporting the nuclear program of Israel.

The Cuban press said that Ahmadinejad's visit was more of the economic, rather than of the political character. Most of the Iranian delegation consisted of businessmen and ministers for energy. Iran has been investing in various projects in Latin America during the recent years. In Venezuela, Iran participated in the construction of 14,000 buildings, 26 factories processing agricultural products, a car assembly work and a petrochemical plant.

Iran agreed to support Nicaragua in building small hydroelectric power plants. The country plans investments in the fishing industry, housing development, cement production, automotive production and in the agricultural sector. Cuba built the Middle East's largest center for genetic engineering and biotechnologies in Teheran in 2001. The project was evaluated at $500, 000. Teheran opened a credit line for the country in the amount of $700 million.

"In my meeting, the Iranian president was highly calm, unstressed and completely indifferent to the Yankees' threats. He was certain of his nation's capability to confront any aggression and Iran's arms capability, weapons that most of them are produced by Iranians to give an unforgivable response to the aggressors," Fidel Castro said after meeting Ahmadinejad.