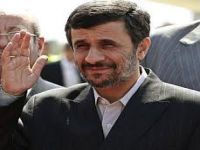 The president of Iran, Mahmoud Ahmadinejad, left Tehran on Sunday (8th), the capital, for Latin America, where he will be for almost a week. He first landed in Caracas (Venezuela), then goes to Managua (Nicaragua), Havana (Cuba) and Quito (Ecuador). The Iranian President travels with an entourage of ministers and businessmen from the country.

For Ahmadinejad, there are cultural similarities between the Latins and the Iranians. The visit to Latin America was motivated, aides said, by the inauguration of the re-elected President of Nicaragua, Daniel Ortega. Ortega is called a General by Venezuelan President, Hugo Chavez, and several Latin American political leaders, for having participated in the guerrilla movement in the country.

The Ecuadorian president informed yesterday (7th), through his advisors, the intention of Ecuador's government is to increase bilateral relations with all countries, including Iran. Ahmadinejad will be in Quito, Ecuador, on the next day, October 12. *

With information from the official news agency of Iran, IRNA / / Edition: Grace Adjuto