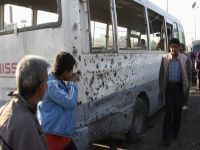 Series of attacks left at least 72 dead in the Iraqi capital...four explosions were recorded in two majority Shiite neighborhoods of Baghdad, raising fears of sectarian violence

A series of attacks left at least 72 dead on Thursday in two Shiite neighborhoods of Baghdad, the Iraqi capital, raising fears of an escalation of violence. U.S. troop withdrawal was completed in December, according to most reports.

The attacks began with the explosion of a bomb attached to a motorcycle near a bus stop in the neighborhood of Sadr City, northeast of the city, where workers gather to seek employment. A witness said the site was filled with smoke.

Shortly after, a bomb exploded on a road in Sadr City, and police said they found a third explosive device that was disarmed before it detonated.

Less than two hours later, two near-simultaneous explosions hit the Kazimiyah neighborhood, north of the capital. In at least one of the attacks, a car bomb was used.

No group claimed responsibility for the attacks and the military spokesman in Baghdad, Major Qassim al-Moussawi, said it was too early to point fingers.

The attacks Thursday are the worst recorded in Baghdad since December 22, when a series of bombings left 69 dead, mostly in Shiite neighborhoods. Al-Qaeda in Iraq claimed the action.

There are growing fears of an escalation in the conflict between Shiites and Sunnis. The tension was compounded by the severe political crisis between the two groups after an arrest warrant issued by the government against the Shiite majority Sunni Vice President, Tareq al-Hashemi.

The government of Prime Minister Nouri al-Maliki accused Hashemi of having paid security guards to assassinate government officials - which he denies. Maliki is also pressing for the dismissal of deputy prime minister, the Sunni Saleh al-Mutlaq, ​​having compared him to Saddam Hussein.

Many Sunnis accuse Maliki of acting to get them out of power. With the system of division of powers established by the United States, Iraq has a Shiite prime minister, Kurdish president and Sunni speaker of parliament.