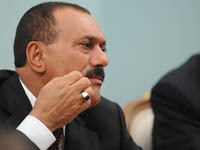 Judging by the reports coming from Yemen, the long-awaited departure of President Saleh is becoming a reality. The mass anti-government protests demanding the resignation of Saleh who remained in power for nearly 33 years have been ongoing in the country since early February.

The inability of the President to cope with the popular unrest became particularly acute in the early spring, when the army units started joining the rebels. Seeing this, other Arab neighbors of Yemen from the monarchies of the Persian Gulf, not without the involvement of the West (mainly the U.S. and UK), have tried to implement a peaceful scenario of Saleh's departure to prevent chaos and further decentralization that threatened the welfare of all the countries in the region.

Their plan was to reach a compromise between the government and the opposition, according to which Saleh in exchange for immunity from prosecution would transfer the leadership of the country to Vice-President Abd Rabbo Mansour Hadi. The latter, in turn, would appoint a transitional coalitional government of "national unity" with equal representation of the former functionaries and the opposition.

This plan was put forward in early April, but has not yet been implemented despite the fact that the opposition approved the terms of intermediaries. Primary responsibility for this falls on Saleh who until late fall refused to accept the offer three times, delaying the time in the hope that the situation would change in his favor.

Apparently, he was not aware of the fact that the West and its allies in the Gulf, after analyzing the situation, decided to get rid of him to make "Yemeni reaction" controlled.

However, eventually it became pointless to deal with the apparent loss. On November 23 Arabic-language resources reported that an agreement in principle has been reached between Saleh and the opposition. On December 7, Vice-President Abd Rabbo Mansour Hadi appointed a transitional coalitional government of "national unity" in which 17 portfolios were given to the former functionaries of the regime, and another 17 to the opposition.

The transitional government is headed by a Socialist Bassandava Mohammed Salem, the head of the opposition National Council. The representatives of the previous government still have control over a number of important portfolios. For example, Abu Bakr al-Kirby remains the Minister of Foreign Affairs of Yemen, and Mohammed Nasser Ahmed - Head of the Defense Ministry. On the other hand, the opposition controls other key ministries. For example, a law enforcement agency is headed by a prominent opposition figure Abdel Kader Kahtan. In addition, opponents of Saleh also got control of the Ministries of Finance, Planning, Justice, Education, Information, etc.

Among the main tasks of the transitional government is preparing for early presidential elections scheduled for February 21.

Can we count on the fact that Yemen has overcome the crisis and the bloody 2011 will be indeed the beginning of a new era for this country? Sergey Demidenko, an Arabist from the Institute of assessments and policy analysis answered this question in an interview with "Pravda.Ru":

"Unfortunately, it is difficult to expect that the era of political instability in Yemen would come to end. There is a very serious threat of disintegration of the country. Remember that the northern and South Yemen were united by force in the early 1990s and the centrifugal tendencies are now obvious as never before. But that's not all the problems. Given the divergent interests of the many clans and tribes of Yemeni, decentralization of the country may be even more significant, and ultimately lead to a war of all against all.

On the other hand, do not forget about the religious factor. Ethno-confessional aspect has manifested in Yemen before the "Arab spring". I am talking about the opposition of Sunni and Shia. The movement of the latter in the north is of great concern to Saudi Arabia. It is not a secret that it is linked to Iran, and is due to its aspirations to change the situation in the region in its favor. Think back to last year's events, when the forces of Saudi Arabia had to conduct a special operation to neutralize them, which, however, was not successful. A new military intervention of Saudis is getting back on the agenda but is much more serious. They just cannot look with indifference at the way Iran is implementing its plans in Yemen, threatening its stability."