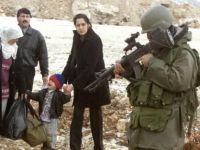 The Israeli regime's military on Monday began military maneuvers in the Jordan Valley, while the Palestinian authorities demand the cessation of settlements in the West Bank as a condition for resumption of direct peace negotiations. The Israeli military carried out military exercises in the northern Jordan River valley, east of the West Bank, a day after the Quartet of Middle East Peace (Russia, EU, UN and U.S.) will advocate for a relaxed ambience, reports Prensa Latina.

Convoys of tanks and hundreds of soldiers were deployed in the broad areas of the valley and it was declared a "closed military zone," said the head of council (government) of the West Bank village of Al-Maleh, Aref Daraghmeh, the Palestinian agency, WAFA .

Daraghmeh also reported that the Israeli regime's forces shelled pastures and fields with heavy artillery. At the same time, the Palestinian National Authority (PNA) announced that Israeli forces arrested seven Palestinians in the cities of Nablus and Bethlehem, to the north and south of Al Quds (Jerusalem), respectively.

The incident occurred after the Quartet urged the parties to dialogue to solve problems.

They also demand that the Israeli regime accept the limits established before the occupation of the Palestinian territories in 1967 as the borders.

However, U.S. State Department spokesman, Mark Toner, said last Friday that Israelis and Palestinians should begin direct talks before any negotiations on borders and security.

Erekat said Washington's conditions indicate that "Americans are trying to blame the Palestinians for the extended deadlock that is the peace process, and ignores that the PNA has cooperated with the efforts of the Quartet."