'We all hate Bashar Assad here' 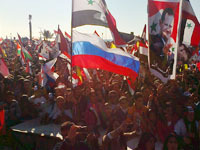 Evil tongues have already buried Syrian President Bashar Assad. Israeli Defense Minister Ehud Barak said, visiting the drills of the Israeli army near Syria's borders, that the fate of Bashar Assad would be solved within several weeks. The fall of Bashar Assad's regime, which has been losing control in the country, would strike a blow on the "axis of evil" in the region and weaken the activities of Hezbollah movement in Lebanon, the official said. Israel will be fully prepared for anything, no matter how the situation in the region may unfold, Barak added.

The remarks from the Israeli official match Israel's strategy towards Syria perfectly. However, what made Mr. Barak think that Bashad Assad's regime was losing control? The author of this article has just returned from Syria, but no matter how hard I tried to find opposition meetings, I failed to have found any. News agencies have recently reported about the bloody clashes between protesters and government troops in suburban areas of Damascus. However, I could not find Assad's opponents there either.

Quite on the contrary, mass meetings in support of the Syrian president are plentiful in the country. The people express their support to their leader and chant: "God, Syria, Bashar!"

Who attends those meetings? There are not many elderly people at them. There are many adult men and many young people. There are also many beautiful young Syrian women.

The people hold national Syrian flags, as well as the flags of the ruling Baath party, Hezbollah and...Russia. I could see many Russian flags waving at the meetings in Latakia and Tartus. As soon as they found out that we were from Russia, they rushed to shake our hands and thank Russia for support.

It did not seem to me that Assad's regime was losing control in the country. At least, Syria's largest cities - Damascus and Aleppo - support their president. Everyone who attends those meetings in person and sees everything with their own eyes will be led to believe that the majority of Syrians support Assad. Is it really so?

Syria's third and fourth largest cities - Homs and Hama - can hardly be described as loyal to Assad.

The sentiments in Hama are completely different than those in Damascus. The residents of Hama look gloomy. When visiting the local university, we received a note, which, among other things, said: "We all hate Bashar Assad here."

If you take a look at the situation in Syrian provinces, it may seem to you that the country is about to fall apart. The trip of the Russian delegation to Syria was secured, but we had to board a plane to get from Aleppo to Latakia to cover the distance of only 200 kilometers. We had to fly from one city to another because of possible terrorist attacks. Guerrillas do not conduct their activities in the streets of Syrian cities. They settled in the mountains, from where they attack civilians and military men.

The meetings in Syria mean that Assad's regime is still strong. However, it does not mean that the future of the regime is going to be bright. Will Bashar Assad manage to win when the time comes?

We could already see many of such meetings in Libya. Thousands were supporting Gaddafi in Tripoli, but the lion's share of them refused to fight for their leader. Many of Gaddafi's supporters happily celebrated his death afterwards. This may happen in Syria too.

Can the Arab spring in Syria be different from that in Libya? They are two different countries, of course, but there are certain national traits that the Syrians and the Libyans have in common. For example, Arabs prefer to support the strong. If their leaders prove to be weak, the crowd may change their views about them in an instant.

Will there be many Syrians who would risk their lives to defend Bashar Assad with deadly force?