North Korea threatens to sweep away South with deluge of fire 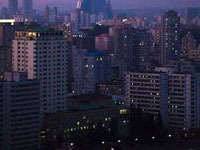 The authorities of North Korea have released a number of controversial statements. In response to the beginning of US-South Korean military drills, North Korean officials threatened to scorch the residence of the South Korean president. In addition, the North Koreans demanded Japan should compensate the country for the atrocities committed against the Koreans during the years of the Japanese occupation in the first half of the 20th century.

The bellicose statements from North Korea became the country's response to the new military drills held by the United States and South Korea. The exercises, which  began on November 23 in the Yellow Sea, are timed to the anniversary of the attack on South Korea's Yeonpyeong island. Last year, North Korea's attack on the island resulted in casualties and seriously aggravated the political situation. Fortunately, the conflict did not evolve any further.

A year after the incident the USA and South Korea joined efforts again to hold new military drills. There are no doubts about the fact that the drills in the Yellow Sea are aimed against North Korea. US and South Korean military men model the situation of artillery attack from North Korea. The latter showed the traditionally nervous reaction to the drills.

According to North Korean officials, the exercises were organized to strengthen confrontation between the two Koreas and to provoke an armed conflict with the North.

"If one single shot drops in our sacred waters and territory again, the sea of fire on Yeonpyeong-do will spread to a sea of fire on the Blue House, and that deluge of fire will sweep away the stronghold of the group of traitors," the Supreme Command of the North's People's Army said in a statement carried by the official Korean Central News Agency.

"The stronghold of the group of the traitors" is the presidential palace in Seoul.

In addition to this scandal, North Korea is working on another one - with Japan. North Korea's leading newspaper, Nodon Sinmun, published an article, the authors of which urged Japan to apologize for the crimes committed against the Koreans in 1910-1945, when the Korean Peninsula was virtually a Japanese colony. What is more, Japan owes compensation to North Korea, the article said. "Japan is not willing to acknowledge the crimes of Japanese imperialism of the past. At any rate, Japan will not be able to avoid responsibility for multiple war crimes," the article said.

As a matter of fact, the things that the North Korean newspaper said were true. Japan plundered Korea in the past indeed. More than a million Koreans died in hard labor at mines and military enterprises. The Japanese plundered the tomb of King Dangun, the founding father of the Korean nation. South Korea, China, the Philippines and many other countries set forth similar claims to Japan.

However, does the NKorean administration seek historical justice? The relations between Japan and North Korea have been pretty chilly, to put it mildly. The Land of the Rising Sun sets forth counterclaims to North Korea. Japan's claims are connected with the kidnappings of Japanese citizens during the 1970s. Japan has taken single-handed sanctions against North Korea on a number of times. The Japanese administration also supports the international pressure against Pyongyang.

In the meantime, the situation inside North Korea does not look promising or prosperous at all. According to a recent report from the World Food Program, as many as 3 million North Korean citizens will be suffering from undernourishment in 2012. The country will have to import nearly 740,000 tons of crops even though the harvest collected in the country this year was 8.5 percent larger that in 2010. If North Korea sees any money from Japan, the country may spend it on food.

Needless to say that North Korea is unable to handle its problems alone. The development level of the country corresponds to the level of European capitalism between the 19th and the 20th centuries. North Korea is forced to spend immense funds on the army, so it needs to look for any sources of income possible.

Vladimir Khrustalev, an expert with the Center of International Research in Vladivostok, said in an interview with Pravda.Ru that North Korea showed a traditional reaction to the new drills between the USA and South Korea.

"The North constantly says something about the threat of war. However, the only thing that can lead to a large-scale armed conflict is a technical mishap when a missile, for examples, flies in the wrong direction. As for the compensation claims for Japan, there are elements of propaganda in that, of course. Those claims were made for the North Korean population in the first place. No one is going to take North Korea's claims seriously, because this country owes a lot to many other countries."