Fight against the womb of capitalist barbarism 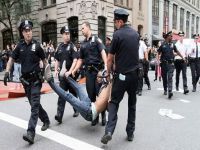 With the existing nuclear arsenals, global military escalation has unforeseeable consequences. Again, the market approaches the womb that bore the Beast. In the first days of November, there is a dangerous wave to redesign the international scene.

The script was so hasty, it leaves no room for doubt as to the real interests that move the puppet theater of the macabre. The report of the International Atomic Energy Agency (IAEA) containing allegations against the government of Iran was released one day before the English press announced that the government of Benjamin Netanyahu is planning a major offensive against Iranian installations.

The United States and European Union promptly defended the adoption of additional measures. There are many variables at play, but there is circumstantial data that we cannot ignore.

In the first place, one must go back in time to understand the geopolitical chess in the Middle East. It is essential to recognize the reasons that led the Israeli government, backed by U.S. imperialism in the region, to put all of its weight on a high-risk military adventure.

These reasons can only be found in the U.S. defeat as a result of the Iranian revolution, and especially the military downfall of its then representative, Iraq, in front of the Iranian masses who were imbued (despite detours of the direction of Islam) with an anti-imperialist proposition. After so many years, it is plausible to work with this hypothesis? The answer is affirmative.

At the time, the defeat did not come alone, but together with an upsurge of workers in the region, including the emergence of the movement "Peace Now" in Israel - the first mass movement in Israel to question the very essence of the State of Israel as a "police state" of the U.S. - the fact that updates the puzzle that was the successful diplomatic offensive of the President of the Palestinian National Authority (PNA), Mahmoud Abbas, asking the Security Council to recognize an independent state.

Add to that the accession of Palestine as a full member of UNESCO, the reactions were immediate: the United States suspended its financial support to the entity. And Israel, sabotaging any possibility of peace, accelerated the process of settlements in East Jerusalem.

The prospect of isolation, although it disposes of the full support of the major EU countries, led the Yankees and their puppets to organize a daring adventure. If undertaken, it will dispose of the support of the "opposition" Labor Party in Israel. The scope of the operation, with all sorts of atrocities that it involves, will release forces that further divide Israeli society itself and the Jewish community in general.

The fascist tests, that are spread dangerously worldwide, must be stopped and will only be avoided with a protest movement of millions of people and progressive governments, together with a single aim: to banish wars, ban weapons of mass destruction, imposing the strength of the people, peace and disarmament. The fight against the womb that gave birth to these numerous Beasts is increasingly a confrontation against capitalist "logic."

Gilson Caroni Filho is a Professor of Sociology Hélio Alonso Integrated Colleges, in Rio de Janeiro, columnist and contributor to the Greater Charter Jornal do Brazil