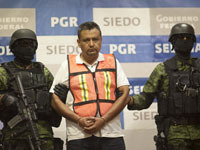 Drug cartels rule Mexico. Those criminal structures are like transnational corporations. They produce and distribute drugs in Mexico and enjoy their undivided reign in the country. Los Zetas cartel is a special phenomenon in Mexico. The cartel was literally created and developed by US special services.

The unique criminal group originally appeared as a military structure. The group appeared to support the activities of Cartel del Golfo. During the 1990s, Golfo was luring military men and officers of special police units of the country - GAFE (Groupo Aeromovil de Fuerzas Especiales) and BFP airborne brigade of the Mexican army.

All the deserters, who made the core of Los Zetas, were trained at the bases of the USA's CIA and then at the so-called School of South America (Escuela de las Americas) of the Western Hemisphere Institute for Security Cooperation. The institute trains military elite for the US-controlled regimes in Latin America, stressing out the suppression of guerrilla movements and the struggle against the distribution of drugs.

The servicemen from the special forces of Guatemala, also the CIA-trained men, joined the group of former military men later. After the USA did away with Colombian drug baron Pablo Escobar, the logistics of drug shipments changed considerably. The Mexicans took the command of the group. They used to send the Colombian cocaine to the United States, but then they began to dictate their conditions to Colombian drug makers.

Cartels were developing, but the leaders of the international drug business did not want to unite into one supercartel or alliance. They eventually decided to use an old-fashioned way of struggling with rats on board. They established the rat-eater. Zetas, whose members were trained in the US commando-training centers, became the rat-eater that would destroy both cartels and the remnants of the Mexican state structure to please the master.

In 1999, after the arrest of the leader of Cartel del Golfo, Zetas showed that they were capable of running business alone. They used brutal methods in struggling with their competitors. Beheading people and then dumping the decapitated and dismembered bodies in public places was a common thing for them to do. One may find videos of such blood-chilling executions on the Internet. They cut people's heads either fast - with the help of a chainsaw - or slowly - with a machete.

Mexican President Felipe Calderon declared a war on the drug mafia. As many as 45,000 people have been killed in the clashes between Mexican cartels and government troops. Another war between Zetas and Golfo started in the beginning of 2010 in the north of Mexico.

The structure of Zetas is a very complicated one. They say that the cartel has several levels, but they virtually represent various formats of the ground forces  - the lowest combat mass of the cartel. They are Los Halcones (the Falcons) - local civilian followers of the cartel who observe the situation in the territories of their control. The Falcons are commanded by the Cobras, also civil personnel.

The so-called New Zetas are the groups of military men from other countries, for example Guatemala, who started working for the cartel. The Old Zetas are those who joined the cartel from GAFE at the end of the 1990s.

These groups make the core of the organization. There are separate regional special groups like the Scorpions, created by local cartel comandante. As a matter of fact, the structure of the cartel is much more complicated. It consists of multiple autonomous groups. The failure or destruction of one of those groups does not affect the work of other links.

"Money, honor and respect are most important for us. We run drug business, and we urge the Mexican and US authorities not to put obstacles for our business. You will not be able to destroy us for one reason. Los Zetas knows everything about the work of police and special services. Special services and police know nothing about the activities of Los Zetas," Arturo Desena, the founder of Los Zetas, a former lieutenant, said.

It appears that Washington will never struggle with the drug business because it destabilizes the financial system of the United States. The system is based on multi-billion "drug investments" from all over the world. Antonio Maria Costa, the head of the UN Office on Drugs and Crime, said several years ago that it was drug cartels that rescued many banks during the crisis of 1998. World's largest drug cartels transferred $352 billion to banks during the hardest period of the crisis, the official said.

The proceeds of organised crime were "the only liquid investment capital" available to some banks on the brink of collapse in 1998. "Inter-bank loans were funded by money that originated from the drugs trade and other illegal activities... There were signs that some banks were rescued that way," Costa told Observer in 2009. A majority of the $352 billion of drugs profits was absorbed into the economic system as a result, he added.

According to Costa, drug cartels rescued the banks of Great Britain, the USA, Switzerland and Italy.

Drugs became a national disaster for the United States a long time ago. It also seems to be a good way to control the population. As many as ten million Americans take cocaine on a regular basis (daily), according to official stats. Up to 40 million more people do cocaine less frequently. If their doses are taken away from them, the country will plunge into chaos.