Libyan rebels: Algeria to explode next 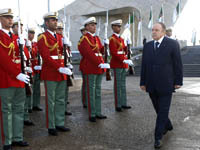 The leaders of the Libyan rebels predict that Algeria will explode after Libya. Among them is the well-known activist of the PNS Bin Khalifa. According to him, "Algeria will explode next. I am convinced that the revolutionary process is already ongoing there. Algeria is a claustrophobic state, totally under the control of the army. The army will not give up power voluntarily. Even President Abdelaziz Bouteflika is no more than a puppet in the hands of the military. "

Such statements could have been disregarded if they were unique. However, the Algerian leadership is preparing for the worst because on November 4 news agency algeria-isp.com has distributed a concerning video. The video shows a representative of a rebels' leader promising to overthrow the government of Algeria for the support of Gaddafi and declares his readiness to launch attacks on the neighboring countries as early as this November.

According to the publication Seven Days News, in Algeria these threats were taken very seriously. According to Algerian reporters in Tripoli, the situation in Libya is now controlled by the extremists, including Islamist groups that have old disagreements with the leadership of the neighboring countries for the defeat in 1990s.

Earlier, the opponents complained that it was Algeria's support that allowed Gaddafi to continue the fight. A special fury of the rebels was caused by the fact that Bouteflika hid Gaddafi's closest relatives on his territory, explaining his actions by a desire to save these people from imminent physical harm to them.

In turn, in August the leaders of Libyan rebel groups made statements about the beginning of a war against Algeria. Then the Islamists carried out a double bombing at the military academy in Cherchell, stating that it was their revenge to the Algerian leadership for the "Libyan intrigues."

Meanwhile, on September 23 Algeria, according to some experts, recognized PNS de facto and expressed the intention to "work closely" with it. Later, other no less expressive gestures towards the new Libyan authorities were made. In practice there could have been no turning 180 degrees in their relationship since PNS does not control the situation in the country.

In addition, the relations between Algeria and Libyan factions during this period have only worsened. Interestingly, the strong statements of the Libyan Islamists largely coincide with corresponding reproaches of the West. Western diplomats, including French Foreign Minister Alain Juppe, are tirelessly expressing concern over Algeria's support of Gaddafi's regime that, according to Western media included, inter alia, arms.

This theory was immediately picked up by a prominent representative of the PNS Omar Hariri who stated that the weapons were "received in Libya and used against our people."

The Algerian side denies this and points out that the first threat is the weapons stolen in Libya. According to the Algerian minister of Maghreb and Africa Affairs Abdelkader Messahel, nearly all terrorist attacks perpetrated in recent months in his country were performed using the "Libyan Arms."
Algeria is a major obstacle to the ambitious plans of the Islamists. Since 1992 it has been in the forefront of combating terrorism in North Africa. Over the past 20 years this country has proven its ability to withstand such challenges.

But now the situation has changed markedly. We should not think that terrorists are the only ones who act against Algeria. Perhaps combined impact tactics can be applied for this country.

Think back to the attempt to organize mass demonstrations on September 17. There were calls for Algerians to arrange "the Algerian Revolution" published on the Internet. Interior Minister Ould Kablia accused the "foreign forces associated with the Zionist entity" of trying to destabilize the country.

It is noteworthy that the so-called opposition was not stopped by the fact that on September 12 the government of Algeria declared the launch of the political reforms promised back in April. Among them was ending the state monopoly on broadcast media, the abolition of criminal penalties for professional mistakes of journalists and introduction of a new law on the legalization of political parties and their activities.

ANDR President Abdelaziz Bouteflika was forced to implement them after the mass performances of Algerians in February. The radical opposition will not accept them, and indicates that this is a vain attempt to delay the arrival of "Arab spring" to Algeria.

However, so far the Algerians who are still hoping for the ability of the authorities to carry out reforms did not support these calls. Despite separate demonstrations, nothing serious happened on September 17 in Algeria. However, there is no confidence that this is not possible in the future. The first attempt of "revolution on Facebook" conceived in Syria for mid-February has also failed. But then we have seen riots in Dera'a, Deir al-Zure, Hama, Lattakia, Homs, and so on.

The more so that there are serious grounds for mass popular discontent in Algeria, and so far there has been no progress in resolving the internal crisis. Algeria has more than enough weak spots in this respect. There is also a common weak point with Libya, including outstanding national issue (Berber Kabyle).

In addition, in terms of a number of positions Algeria looks even more vulnerable than Libya. At least, Algerians could not even dream of the social guarantees provided by the Libyan regime of Gaddafi. The Algerian population is wondering increasingly more often: where did the enormous proceeds from the sale of oil and gas go, and how the authorities are going to spend 160 billion dollars they took from the country to foreign banks?