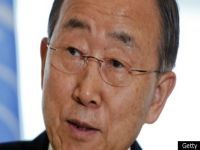 In a cable dated 04.11.2011: "The secretary general of the United Nations, Ban Ki-Moon, said yesterday that the efforts of Palestinians to enter other organizations in the world body, once they succeeded in entering UNESCO, benefit no one." According to Ban, "millions and millions of people could be affected if UN agencies see their funding reduced as a result of Palestinian efforts."

It continues to amaze, the servility bordering on perversion, of these "spokespersons" of the so-called international organizations, with U.S. interests and allies. Now it turns out that the blame for UNESCO having no budget will not be the Americans, but the Palestinians, with the favorable vote of 146 countries to become part of the cultural body attached to the UN.

The reasoning of the secretary-general is similar to the approaches that were used to overcome and justify the oppression of peoples and races a long long time ago.

Thus, the Indo-American genocide was not the fault of the Spanish, but the natives themselves, who refused and were too lazy to become Christianized and so had to be made to submit.

Blacks were brought as slaves and should be punished and beaten, to avoid uprisings and impure thoughts.

Similarly, the great British Empire had to subjugate by force and violence all those people and subjects who refused to be "civilized."

There was always an explanation for all this, the natural order of things requires that some are to rule and subdue, the others to obey and be subdued. The abnormal is that the latter seek to rebel, claiming their right to exist and live together on equal terms with the human race, and those who assisted in such claims must also suffer the consequences of their daring.

Thus we see a Ban Ki-Moon making it clear that America and Israel are not threatened by claiming absolute dominion over the Middle East and the world at large, but the Palestinian thugs are guilty for claiming a place in the community of nations, a daring that has cost thousands of lives over the years and now will set aside one quarter of current funding to the agency that serves cultural issues in the UN .

Unfortunately, there are many who walk the world to justify all atrocities and barbarities that occur from the dominant countries in the name of "progress" and "democracy." It is obvious that the UN model is not only exhausted, it is a real threat to the survival of the human race and the planet itself.

There is a need to create structures that allow organizations to recognize people in a framework of inclusion, in conditions of equality in the international arena. It's an ambitious goal, utopian others may think, but essential if you think about the consequences of continuing to accept the inconsistency and cynicism with which the current UN operates.