Gaddafi hoped to stay in power with Israel's help 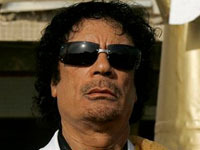 Throughout the campaign against the Libyan regime of NATO, Muammar Gaddafi has made desperate attempts to break the isolation and overcome political and military crisis in the country. The colonel hoped for a diplomatic or military intervention of Israel that was not interested in Islamists coming to power in Libya.

The Israelis expressed some interest in negotiating with the representatives of the Jamahiriya. Most Israeli politicians understood that Gaddafi, even as a dictator, would not take any drastic steps against Tel Aviv.

At the time, the Libyan regime tarnished itself by the open support of terrorism in the Middle East, which did was not agreeable with either the Europeans or Israelis. Despite Gaddafi's public remorse and his refusal to produce weapons of mass destruction in Israel, he was still considered a cruel tyrant. However, after the overthrow of the Colonel at least significant increase in the position of "Al Qaeda" in Libya could have been expected, which was obviously unsatisfactory for the Israelis.

Speculations about a possible Israeli-Libyan "friendship" against the insurgents arose nearly immediately following the start of the troubles. Back in March of 2011 "Al Jazeera" channel spread information according to which Israel acted as a mediator between potential mercenaries and Jamahiriya regime.

Israeli actions were allegedly based on the decisions made at the secret meeting between Prime Minister Benjamin Netanyahu, Defense Minister Ehud Barak and Foreign Minister Avigdor Lieberman. "Al Jazeera" also reported that after this meeting, Tel Aviv took Gaddafi's side.

Then the Israeli Foreign Ministry addressed the public with a rebuttal, but rumors spread quickly across Africa. In Senegal, numerous volunteers surrounded the Israeli embassy and demanded that they are sent to Libya as mercenaries of Jamahiriya. However, such "accidents" played into the hands of Islamists who were ready to use any information occasions to "pump up" the fanatics against Gaddafi. His imaginary friendship with Israel was an opportune moment.

In the summer of 2011 the Libyan leadership has attempted to conduct negotiations with Israel. Apparently, the Colonel hoped not so much for military aid as a diplomatic mediation on his part. According to Israel TV Channel 2, a delegation sent by Muammar Gaddafi met in July with former Israeli Foreign Minister Tzipi Livni. Then she was given a personal message from the Libyan leader, the contents of which, for obvious reasons, were not reported.

Nevertheless, the media became aware of the request of the Libyan side to help change the image of the Colonel in the eyes of the Israeli public. Moreover, Livni received from the representatives of the Jamahiriya a package with intelligence data. Then, in July of 2011, Gaddafi turned to the head of the Jewish community in Libya for help in resolving the crisis in the country. The request was rejected because the Jews refused to accept the dictatorship of the Colonel.

Once the leader of Jamahiriya virtually lost control of the country, the talks with his envoys continued. This time, Israel offered assistance in the liberation of a prisoner of war Gilad Shalit. In return, Libya asked to stop NATO bombing in early September.

The talks were conducted by the Deputy Minister for Development of Negev Ayoob Kara, who was about to go to Libya to discuss conditions of Shalit release with Gaddafi. In addition, it was assumed that the two countries would sign a peace treaty. However, the authorities refused to allow the minister to travel to Libya for security reasons.

Meanwhile, Shalit was soon released, but through the mediation of Germany and Egypt, and the terms of the transaction would not be beneficial for Israel. What did the Colonel know regarding the negotiations about the release of the kidnapped Israeli soldier? Could Gaddafi influence the transaction or was he bluffing to bring the Israelis to his side?

We may never know the entire truth about this story. One thing is clear: in September of 2011 the Colonel's days were numbered. Gaddafi could have been saved from death only escaping from the country. Israel, however, would hardly likely have dared to rescue the leader of Jamahiriya from the massacre. Even the transmission of intelligence data by Libyans to Tel Aviv could not "buy" the friendship of Israelis.

The democratic community of the country would condemn any attempts by the government or the left to help the dictator. In addition, Israel has no interest in fighting with the Western countries when the relationships are not easy as they are. There is no point for Israelis in having disagreements with Europe and the United States over Gaddafi.