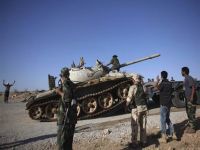 After the criminal and inhumane terrorist attack by NATO and the gangs of bandits, rapists, murderers, looters, arsonists, terrorists and torturers it unleashed against the people of Libya, what is the truth today? We examine the stories coming out of Libya, whose people certainly do not want this scourge thrust upon them as a Government.

The result is a massive indictment of NATO and its leaders for war crimes*, the result is a de facto defeat of NATO (for it was not able to achieve its goals by following the rules of engagement - you do not win a soccer match by strafing the opponents with machine guns and grenades and then packing the field with 50 players).

And what about the situation on the ground? While the rats deny it, Tajoura, Tarhouna and Bani Walid are under Green (Jamahiriya) control, because the people want to live in the Jamahiriya system and do not want to be controlled by gangs of terrorists and their foreign masters who wish to siphon off Libya's oil. Rat graffiti is being replaced with Green walls.

Meanwhile southern Libya is Green (pro-Jamahiriya and anti-rats) and the population is resolute to rid the country of traitors, terrorists and criminals who sold out to NATO so that the FUKUS countries (France, UK and US) could steal the country's sovereign funds and its massive resources.