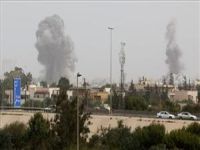 The imperialist domination in the wake of the Opium Wars.

"The 'alleged' death of Qaddafi is a historic turning point," the leaders of NATO and the West proclaimed in chorus without even bothering to keep its distance from the media production being portrayed as the barbaric assassination of Libyan leader and the shameless lies the heads of the "rebels" uttered. Yes, indeed it is a turning point. But to understand the meaning of the war against Libya in the context of colonialism is far from accurate ...

When, in 1840, the British warships appear before the back of Chinese cities, the attackers dispose of a firepower of thousands of guns and can sow death and destruction on a large scale without fear of enemy artillery, whose range is very small. It is the triumph of the gunboat policy: the great Asian country and its ancient civilization are forced to surrender and begin what Chinese historiography rightly called "the century of humiliation," which ends in 1949 with the coming to power of the Communist Party and Mao Zedong.

In our days, the so-called Revolution in Military Affairs (RMA) created in many Third World countries a similar situation to what China had to face in their time. During the war against Gaddafi's Libya, NATO could calmly accomplish thousands of bombings and suffered few casualties and even little risk of them if one is to believe the media.

In this sense, NATO's military force, rather than a traditional army, looks like a execution squad. Thus, the final staged execution of Gaddafi, rather than a causal or accidental fact, reveals the deep meaning of the operation altogether.

It's something tangible: a renewed technological and military disparity reminiscent of the colonial ambitions and temptations of a West that, judging by their exalted self-confidence and false conscience that they continue to demonstrate, they refuse to settle accounts with history. And it's not just a question of aircraft, warships and satellites.

It is even clearer the advantage that Washington and its allies have to count on in their media bombardment capability. Also this "humanitarian intervention" against Libya is an example from a manual: civil war (triggered, among other things, thanks to the extended network of agents and Western military units during which the so-called "rebels" provided the beginning by making it appear as a killing (with planes) perpetrated by the power against a defenseless civilian population. In contrast, the NATO bombing that up to now attacks Sirte and continues to hit the besieged, who are hungry, without water or medicine, but this is being presented as humanitarian operations in favor of the civilian population of Libya!

Today this work, besides disposing of the traditional ways of information and disinformation, is a technological revolution that completes the Revolution in Military Affairs. As explained in previous articles and speeches, authors and Western media outlets are close to the State Department that celebrate that the U.S. arsenal has been made rich with new and formidable instruments of war.

Western newspapers are of proven Western faith so that they conduct their activities without any critical sense. During the "Internet wars" their manipulation and lies, as well as incitement to violence by ethnic and religious minorities, are the order of the day. This is what is happening in Syria against a leader who more than ever is harassed for having resisted Western pressure and intimidation and for having not capitulated before Israel to betray the Palestinian resistance.

But back to the first opium war, ending in 1842 with the Treaty of Nanking. It is the first of the "unequal treaties" that is imposed with gunboats. The next year it's the United States. They also send gunboats to obtain the same result as Great Britain, including something more.

Also today the twin criteria of legality and jurisdiction is an essential element of colonialism: the "dissidents", that is to say, those who convert to the religion of human rights as proclaimed from Washington to Brussels, the potential Quislings in the service of the aggressors, are awarded the Nobel Prize and other awards as after the West triggers a rude campaign so that prize-winners undermine the jurisdiction of their country of residence, a campaign reinforced with embargoes and the threat of embargo and "humanitarian intervention."

The double standards of legality and its jurisdiction achieves higher altitudes with the intervention of the International Criminal Court (ICC). U.S. citizens, U.S. soldiers and mercenaries of the stars and stripes all over the world are and should be outside their jurisdiction.

Recently, the international press revealed that the U.S. is willing to veto the admission of Palestine to the UN, among other things, to prevent Palestine from being able to denounce Israel before the ICC: in any case, in practice if not in theory, it should be clear for the whole world that only the colonized peoples can be prosecuted and convicted.

The temporal sequence is itself eloquent. In 1999: despite not having obtained authorization from the UN, NATO began bombing Yugoslavia, shortly after, without loss of time, the ICC does not deal with the perpetrators and prosecute leaders of the breakdown of international legal order established after World War II, but Milosevic. 2011: violating the UN mandate, far from worrying about the fate of civilians, NATO uses all means to impose regime change and gain control of Libya.

Following an already rehearsed list, the ICC comes to incriminate Gaddafi. The so-called International Criminal Court is an appendix of the judicial execution squad of NATO. It might even be said that Hague judges are like priests, who without wasting time to comfort the victim, make great efforts to directly legitimize the executioner.

One last point. With the war against Libya, a new division of labor within the framework of imperialism arose. The large traditional colonial powers such as Britain and France, using the decisive political and military support from Washington, focus on the Middle East and Africa, while the United States increasingly moves its military to Asia. And so we return to China.

After leaving behind a century of humiliation that began with the Opium Wars, the Communist leaders know that it would be foolish and criminal to be lacking for a second time to meet with the technological and military revolution, while they free hundreds of millions of Chinese out of poverty and the hunger that they had been condemned to by colonialism, the powerful economic development of the great Asian country is also a measure of defense against the constant aggression of imperialism.

Those who, including the "left" put themselves in tow to Washington and Brussels with the task of systematically defaming Chinese leaders demonstrate that they do not even care about the improvement of the living conditions of the masses nor the cause of peace and democracy in international relations.