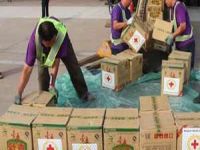 Ethiopia now has the first batch of food aid provided by China valued at 24 million dollars to support that country in its fight against the effects of a severe drought.

Humanitarian assistance was officially presented yesterday by Wei Hongtian, charge d'affaires of the Chinese embassy, to the Ethiopian Minister of Agriculture, Wondirad Mandefro, according to widespread press here.

The shipment is part of the aid that the government of his country decided to provide the population affected by drought in the Horn of Africa, said Wei.

Liu Weimin, a spokesman for the Foreign Ministry recently indicated that this nation will donate more assistance in this area and noted that the first shipments arrived last month.

It is reported that the country has already pledged to offer about 70 million dollars in emergency aid in the form of grains to African territories affected by the worst drought in 60 years. Millions of people are suffering from hunger.

Starting from last year, the Horn of Africa region, which includes Somalia, Djibouti, Eritrea and Ethiopia, has been devastated by severe drought. More than 12 million people there desperately need food and humanitarian assistance.

China announced it is willing to expand cooperation with Ethiopia in areas including industrial investment, technology transfer and efficient agriculture to help realize sustainable development in the African nation.

China has a long history in aiding Africa since the founding of the People's Republic of China in 1949.

Deng Yanting, a researcher on African studies with the Chinese Academy of Social Sciences, noted that China's aid to some African countries should be optimized.

He said China's aid should be more focused on capability-building of African people, instead of pure "project delivery".