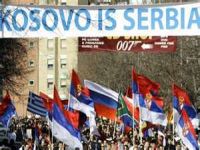 NATO's next stop? It will have to be somewhere where there are Islamist terrorists to side with, somewhere whose population can be easily bombed, meaning somewhere defenceless and somewhere where the worst dregs of society can be turned into governors, politicians and ministers. Where could that be?

"Gradual and unconditional" independence for Kosovo, ripping the heart out of Serbia, a meddlesome and intrusive, unwelcome and unasked-for act of blatant arrogance from non-Balkan peoples. This is the legacy of NATO the world over.

The Albanian government has claimed at various times that the Albanians are the descendants of the Illyrians, the original inhabitants of this region, and that therefore they have a right to this Province of Serbia.

However, for anyone who bothers to do any research, this is utter nonsense. However much one adulterates the word "Illyria", one does not get anywhere as near to "Albania" as the "Albani", a tribe which had lived on the Caspian Sea and which many centuries after the Illyrians had been conquered by the Romans, moved westwards into their mountainous refuge, where these tribes remained as the "Shqiperi" or "eagle people". Polybius (200 - 118 BC) writes that the Albani and Illyrians spoke two distinct languages and needed interpreters to understand each other. Indeed, it was under the Ottoman domination of the Balkans that the Albanians settled definitively in the area which is Albania today. Besides, the Illyrians never referred to themselves as a single people or group of peoples, simply because they were not, neither did they speak a common language.

A study into the ethnic composition of Kosovo over history shows very clearly that the Serbs are the original inhabitants and therefore have a birthright to retain Kosovo. It was the Serbian army, led by prince Lazar, which fought the heroic battle of Kosovo Polje (Blackbird Field) on June 28, 1389, gaining an honourable draw against the might of the Ottoman Turks, but being so weakened that by 1459, all of Serbia had been occupied. However, Kosovo Polye stood firm in the hearts and minds of generations of Serbs for hundreds of years as their rallying cry.

With the Serbs now penned into Northern Kosovo, the northern part of their own province, that terrorist mafia filth NATO backs (similar to the filth it backs in Libya) has run amok. These are the rapists, terrorists, murderers, looters, arsonists and torturers, organ traffickers which NATO cavorts with then labels "Minister" or some such nonsense. When was Hashim Thaçi "minister" of anything? He has been accused of organ trafficking and NATO calls him "Prime Minister" of Kosovo, a country that does not exist. Why not call him King of Saturn, or better still, King of Mercury and send him and his Shiptari terrorists there to burn in Hell?

To protect this filth, NATO forces have given the Serbs a further 24 hours to take down their road barricades, set up to protect the Serbs and to allow ambulances to pass, to get them to hospital after Albanian mafia thugs dressed as policemen strafe civilians with gunfire; these barricades were set up to ensure that anti-Serb elements were not placed at the only escape routes Serbs would have into Serbia if the long-awaited ethnic cleansing (backed by NATO) went ahead and drove them out of Kosovo, their own homeland.

It would be a bit like forcing all US citizens out of, say, Virginia and replacing them with Arabs, or telling the English that Kent was not to be French, or telling the French that the English possessions of the Medieval era were to be returned, a bit like giving Italy's Trieste to Slovenia, giving the Sudetenland and Rhineland back to France, telling Portugal it is part of Spain or giving Spain's Galicia to Portugal.

The Kosovo mafia terrorist leader, accused of organ trafficking, Hashim Thaçi, can bray like a donkey or bleat like a goat about the "rule of law" being applied, but what rule of law were he and his Ushtria Çlirimtare ë Kosovës applying when they were beheading Serbs and raping women, including Albanian girls?

Correct - the law of the jungle, where apes belong.