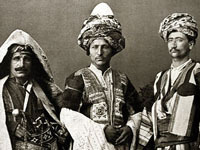 The supporters of Kurdish independence announced the beginning of the armed rebellion against Bashar Assad's regime. The story began on October 7 with the murder of one of the leaders of Syrian Kurds, Meshaal al-Tamo, in the north-east of Syria.

Tamo was killed near his house. The circumstances of his murder remain unclear. However, Western and Israeli media made Meshaal al-Tamo yet another victim of "Assad's bloody regime."

It is worthy of note that the inactivity of the Kurds became one of the discoveries of the so-called Syrian revolution. This became a surprise indeed, because everyone thought that the Kurds would struggle against the Syrian regime violently.

However, The Kurds showed no reaction at all. The Kurdish protests of 2011 pale in comparison with the football riots in 2004. The riots sparked after seven Kurdish football fans were killed in a brawl with Arab fans. Security services arrested over 2,000 people during those events.

Nowadays, the number of the "victims of the revolution" in the Kurdish territories of Syria is considerably lower than that in other parts of the country. One has to bear in mind the fact that the Kurds are one of the largest ethnic minorities of Syria: from 1.5 to 2 million people.

Many Kurds claim that Assad's regime suppresses their culture. The people particularly say that they are not allowed to teach the Kurdish language at schools, nor can they establish a Kurdish-language radio station. Others claim that Assad had taken away their lands in the border areas between Turkey and Iraq.

The inaction of the Kurdish population can be explained with the actions, which the Syrian authorities have taken recently. They realize how important the Kurdish issue can be for the country during the crucial moment of the national history.

As a result, the Kurds find it hard to decide how they are supposed to react to the events in the country. The majority of the Kurdish leaders acknowledged that they did not have the program, which they could use in case of the collapse of the Ba'ath regime.

Many Kurds believe that the fall of Bashar Assad's regime will seriously complicate their lives. The fact that Turkey is taking an active part in the events in Syria also raises concerns with the Kurds. Turkey openly supports the Arab opposition. One can be certain that Turkey will not leave things to take their own course in the Syrian Kurdistan in case Assad's regime in the country falls. Ankara may simply occupy those lands.

Nevertheless, the quiet situation in Syria's Kurdish areas is a problem for many. The Syrian opposition does not have many achievements to boast of. The Syrian military suppressed all riots with relatively small losses. To put it in a nutshell, there is no point for the opposition to protest without the support from the Kurds.