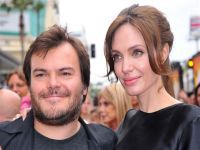 For the past decade Hollywood movie star Angelina Jolie has been an official "Goodwill Ambassador" for the United Nations Humanitarian Commission for Refugees (UNHCR) and has been so overflowing with goodwill that two years ago, she called for the USA to declare war and bomb Sudan.

The last few days have seen Ms. Jolie crying crocodile tears for the victims in Somalia of the worst drought to hit the Horn of Africa in decades. Somehow she failed to mention that her colleagues at the UNHCR had just a few months ago cut the food rations they were supplying to some one million Somali refugees to just 30% of the daily minimum needed to survive.

Apparently "goodwill" doesn't stretch far enough to include donating what Angelina Jolie makes in just one her many films to keep hundreds of thousands of Somali children from slow starvation.

While announcing that three quarters of a million people were starving to death in Somalia, she neglected to mention that just across the border in southeast Ethiopia, the Ogaden, another UN agency, the Famine Early Warning System (FEWS) had just a few months ago reported that millions of Ethiopians were in the throes of starvation.

These Ethiopians are Somalis too. For every major clan and even sub-clan found in Somalia proper is found in the Ogaden as well.

Maybe Ms. Jolie didn't want to embarrass Ethiopian Prime Minister Meles Zenawi who was reported to have personally welcomed Angelina Jolie to Ethiopia when she arrived there to buy/adopt ($30,000 "donation"?) her Ethiopian baby daughter a few years ago.

Not only are millions of Somalis in Ethiopia starving, but now it is reported that cholera has broken out in the Ogaden as well. With both the Red Cross and Doctors Without Borders having been expelled from the Ogaden by Mele Zenawi for four years now, it is going to be difficult if not impossible to fight this deadly but very treatable disease.

Angelina Jolie has been one hell of a "goodwill ambassador" for the UN in Africa. You know, demand the USA declare war and bomb Sudan and then turn a blind eye to starvation and disease in Ethiopia. All the while your colleagues in the UNHCR oversee the "humanitarian" slow starvation of a million refugees next door in Somalia and Kenya.

Yessirree, Angelina Jolie has certainly turned out to be a Hollyweird "Goodwill Ambassador" to Africa. With her track record one can only fear what she has in store for the rest of the world.