Brazil to strengthen defense against the West 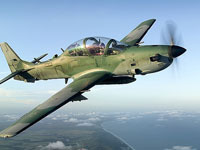 Brazil's defense spending in 2012 may increase by 18 percent to $34.9 billion. In the beginning of 2011, the Brazilian authorities were going to considerably cut the defense spending, which infuriated the military.

Brazilian defense officials said that in the beginning of the year there was such a need to find extra funds to liquidate the consequences of natural disasters, particularly massive floods in January. Nowadays, the officials claim that there is no reason to continue the practice.

The underfunding of 2011 has already affected the program of the modernization of military hardware, Brazilian generals said. In case the government decides not to assign additional funds on defense, the country will not be able to respond to potential threats from abroad.

However, if the program is approved, Brazil will enter the top ten of the countries with largest defense budgets. The government will most likely wish to cut the program, although the reduction is not going to be significant. Otherwise, Brazil will not be able to modernize its outdated hardware. Moreover, the country will not have an opportunity to implement a number of ambitious projects. They particularly include the development of the Brazilian Embraer KC-390 military transport aircraft, the licensed assembly of 50 EC725 helicopters and the design of the new SISCOMIS satellite communication system.

Nevertheless, such a considerable increase of defense spending raises one question. Whom is Brazil afraid of?

Let's take a look at statistics. In 2005, Brazil was ranked 18th with $9.94 billion spent on defense purposes. Nowadays, it goes about a much larger amount of money.

Brazilian defense officials say that the allocation of additional funds has a goal to build a mobile army. The army would be capable of fighting off any challenges within shortest amount of time possible.

It goes without saying that Brazil is the most powerful country in South America from the point of view of defense. Until recently, the country was spending only 1.1% of its GDP on defense. Its armed forces were the strongest in the region - 314,000 people.

Brazil's competition with Argentina is a matter of the past. The two countries have been expanding their cooperation recently. Brazilian defense officials may often refer to Venezuela's Hugo Chavez, but this country is not an enemy to Brazil either. Brazil has a number of territorial disputes with Venezuela. However, Chavez has much more serious problems with Colombia and the West. Brazil seems to be a partner for Venezuela. The two countries have been developing mutually beneficial cooperation steadily, in the field of energy, for example.

To understand the reasons of the growing militarization of Brazil, one needs to make a retrospective journey into history. During the 20th century, the economy of the country was growing steadily. In the beginning of the new millennium, the country was getting more and more influence on the international arena. A stronger economy gave Brazil an opportunity to run independent policies.

Many have forgotten the times when the Brazilian authorities were serving the United States. This was a trend before 1985, when Brazil was ruled by the US-oriented military junta. Nowadays, Brazil often acts against Western interests when solving most painful issues, such as the Iranian nuclear program, for example.

After the Argentina's defeat in 1982, Brazil supports the solution of the Falkland dispute in favor of Buenos Aires. This factor raises serious concerns with Great Britain and its close allies.

The West criticizes Brazil for its supposedly irresponsible attitude to the Amazon basin, which Western officials refer to as the common property of mankind. In addition, the Brazilian administration realizes that the West pays too much attention to the preservation of the region, which accumulates up to 15 percent of fresh water on the planet. Furthermore, the West criticizes Brazil for taking insufficient effort in the struggle against drug trafficking. To crown it all, the West is concerned about Brazil's intention to concentrate on the deposits of raw materials targeted by transnational corporations.

Brazil sees all that as the attempts to interfere in internal affairs, which threatens the country's security. Brazil is very well aware of the fact that the survival of a state depends on the fighting efficiency of its armed forces.