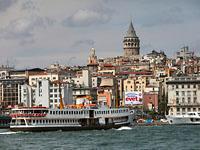 In response to a series of attacks by Kurdish rebels, Turkey has deployed active military operations against them. Yet, despite the overwhelming superiority of the Turks in terms of manpower and equipment and the lack of defenders of the Kurds in Israel and among the Western powers, the victory of Turkey is not guaranteed. The 40,000,000-strong Kurdish community widely scattered throughout the world is too powerful.

The results of the parliamentary elections held in summer with the landslide victory of the ruling party of Justice and Development did not satisfy the Kurdish nationalists. Kurdistan Workers Party (PKK) has threatened Ankara with an open war in case of continuation of previous policies aimed at infringement of the national interests of the Kurds.

In August, PKK gunmen attacked a Turkish army convoy in the south, killing at least eight Turkish soldiers. Since that time, Turkey began active operations in the Air Force and ground forces against the extremists. On August 23 the world's media reprinted the information on the elimination of 100 Kurdish rebels sent by the Turkish military. The strikes were mainly conducted by the Air Force that destroyed several strongholds of the PKK.

On September 13 an official statement was made by the Minister of Internal Affairs of Turkey Irsisa Naim Shekhinah about the impending invasion of ground troops into northern Iraq to eliminate Kurdish rebels. According to him, the action must be coordinated with the government of neighboring Iraq. In August and September a total of 58 flights have been conducted by the Air Force that destroyed a number of command posts and arms and ammunition depots. At the same time there was fire by the artillery stationed along the Iraqi border on previously identified targets. In late September, Turkish Prime Minister Recep Tayyip Erdogan reiterated the resolve of the country leadership to conduct a military operation to destroy PKK bases.

Kurdish rebels, however, continued to actively carry out attacks on Turkish troops. On September 24 only three times they were able to attack various military targets. According to Associated Press, the most violent confrontation took place near the town of Pervari located in south-eastern Turkey. Before attacking, the extremists have installed mines to hinder the approach of the army reinforcements.

At the same time, when helicopters arrived, fire was opened against them. The Turkish side lost five people and over a dozen were injured. In addition, the group "Freedom Falcons of Kurdistan" has claimed responsibility for recent terrorist attack in Ankara.

However, we cannot rule out that a military solution to the Kurdish issue until recently was regarded by Ankara as not the only one. But the Turkish government was embroiled in a nasty political scandal involving the leakage of information about the participation of one of the security forces in secret talks with the PKK. In 2010, a government official (later chief of one of the Turkish secret services) Hakan Fidan several times secretly met with one of the leaders of the RCP Sabri Oko. Earlier, Turkish authorities have denied any possibility of negotiating with terrorists.

The opposition reacted angrily to the "leakage", regarding such contacts as a betrayal. Prime Minister Erdogan and his party defended his closest ally, accusing Israel of the scandal. The Minister said that Israeli intelligence has long followed the Fidanom and then leaked the incriminating evidence in the Turkish press.

In addition, following the deterioration of the relations between Turkey and Israel there have been many insinuations on possible support by Tel Aviv of the Kurdish separatists. However, Netanyahu's government remains very cautious in this matter, in order to avoid a final break with Ankara. Under these conditions, the U.S. also is unlikely to openly support Kurdish separatists, as Turkey should keep in NATO.

One thing is clear: the current conflict between the Kurds and Ankara has finally entered the stage of the acute military confrontation. At a first glance, the Kurdish separatists have nothing to oppose to the regular parts of the two most powerful regional powers. The size of the organization, according to various estimates, ranges from five to fifteen thousand people. According to the official sources, the Turkish army has already caused enough damage to PKK killing over three hundred fighters in the last month. However, in the long-term the results of such a confrontation might be not so rosy for Ankara. First of all, thousands of Kurdish rebels are sympathetic towards their compatriots living in Iran, Iraq, Syria and parts of Europe. The total number of Kurds living throughout the world approaches 40 million people.

At the same time, the idea of ​​establishing an independent state on the territory of Kurdistan is popular enough among the wider Kurdish population. Turkey is now anxiously watching the separatist tendencies in northern Iraq, where Kurds have already created autonomy. This autonomy is theoretically capable of becoming a collector of Kurdish lands divided between Iraq, Turkey, Iran and Syria. The Turks are less than satisfied with this development. This means that the fights in the south-east of Turkey are unlikely to subside soon.