Terrorists and NATO are failures in Libya despite genocide 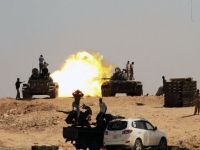 Sirte will not fall, frustratong the NTC and NATO scammers

The armed groups of the self-appointed National Transitional Council attacked the Libyan city of Sirte again on Monday, after a retreat that its leaders justified as a "tactical retreat," which increased the frustration at the persistent strength and resistance of the forces loyal to Muammar Gaddafi.

The military forces of the self-appointed National Transitional Council (NTC) again attacked with the support of aviation provided by the North Atlantic Treaty Organization (NATO), an imperialist aggressor pact, which bombed areas of the city center, although many civilians continue to try to live there.

Residents who managed to get out blamed NATO and terrorists of the NTC for causing suffering to the population because the injured lack drugs because hospitals are bombed.

The Atlantic alliance itself confirmed on Monday that it hit many targets there, many of them allegedly military, with the contrived claim of protecting civilians, but the spokesman for Gaddafi, Moussa Ibrahim, blamed them for deliberately killing hundreds of innocent people.

Witnesses reported that tall columns of smoke emanating from the city were visible shortly after they heard loud explosions caused by NATO bombs and artillery forces of the NTC, as well as the tenacious response of pro-Gaddafi fighters.

People interviewed for regional TV channels reported that Gaddafi fighters dominate strategic positions from which they effectively strike forces of the terrorist NTC, which had to quit yesterday to retreat from their attempt to advance to the city center.

Rockets, grenades, mortars and snipers are the key resources that the Gaddafi faithful use to defend Sirte, his hometown, and Bani Walid, another bastion of resistance located southeast of Tripoli.

A military commander denied that the NTC was been forced out of Sirte in disarray and claimed that it was a "tactical withdrawal" after reaching three objectives, one of which was supposed to create a corridor for themselves to set upon innocent civilians.

The other two purposes, according to the vision of the terrorist elements, were to secure the suburbs and block any possible escape route for pro-Gaddafi fighters or civilians.

However, thousands of city residents are still suffering from shortages of food, medicines, drinking water and fuel, and are continually exposed to indiscriminate and increasingly cruel bombing by the Atlantic alliance, whose only purpose is to pave the way for a terrorist takeover, revealed local residents.

The same source quoted the spokesman of the NTC who admitted the magnitude of the resistance inside Sirte and said there were not enough men to control a territory where Gadhafi has prestige. Gaddafi's whereabouts are unknown since late August.

On the other hand, resistance to foreign aggression is also maintained in Bani Walid, where medical sources indicated that in the last 24 hours the NTC lost at least 30 men.