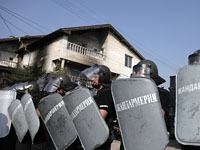 The gypsy (Roma) issue has become particularly intense in Bulgaria recently. The poorest country of the European Union has not seen such large national conflicts in many years. The Bulgarian prime minister even had to release an official statement in connection with the problem.

The conflict took place in the small settlement of Katunitsa, which is located not far from Bulgaria's second largest city of Plovdiv. On September 23, a minibus driven by one of the associates of notorious Roma clan Kiril Rashkov, aka Tsar Kiro, ran over a 19-year-old Bulgarian man. The young man died. His closest friend, a 16-year-old teen boy, could not handle the loss, and died some time later as well. He had a weak heart. The local residents were enraged with what had happened. However, no one was expecting that the tragedy would trigger such consequences.

The riots in Katunitsa continued for two days. The local residents gathered near the house of the Roma baron; up to 3,000 football fans from Plovdiv arrived in the village to help them. The people would set his cars ablaze and smash windows in other gypsy houses.

The people had only one requirement. They wanted all gypsies to leave the village immediately. Three people were killed in the riots, several others were injured. Up to 800 people took direct participation in the pogroms; approximately 120 were arrested.

The riots later spread to other Bulgarian cities, including Plovdiv. A crowd of fans and other people, who were deeply disturbed with the tragedy in Katunitsa, headed to the Roma quarter. They smashed all windows in a local mosque. Special police units from the Bulgarian capital put an end to the riots. The situation went back to normal more or less only on Monday.

Spokespeople for the Bulgarian administration showed a reaction to the events. Bulgarian President Georgi Parvanov changed his work schedule and arrived in Plovdiv. Prime Minister Boyko Borisov released a special address to the nation. The prime minister said that he could understand the indignation of Katunitsa residents. He also urged people to stop the riots in the country. He said that there were many other nations living in Bulgaria - the Bulgarians, the Turks and the Gypsies.

Surprisingly, the Bulgarian prime minister cracked down on the previous communist authorities. He claimed that it was the communists who drove the gypsies in special ghettos where they could live without work and just do nothing. The sitting Bulgarian authorities only have to reap the fruit of that for 20 years, Boyko Borisov said.

The ill fame of Bulgarian gypsies spreads far beyond the borders of the poorest country of the European Union. In Europe, gypsies live in France, Germany and many other countries of Western Europe. They live separately from the society and make their living on drugs, swindling and robbery.

Last year, French President Nicolas Sarkozy ordered to expel Bulgarian and Romanian gypsies. The German authorities do the same, albeit not so pompously as it happens in France. As a result, the Bulgarian gypsies return to their motherland, where they receive no welcome whatsoever.

Alexander Safonov, an expert for Bulgaria, a historian, told Pravda.Ru that the current situation in Bulgaria means that the Bulgarians simply let out their steam.

"The tension in the relations between the Bulgarian nationals and the gypsies has been growing for at least ten years. Now they had the reason to splash it all out. In Bulgaria, they set forth a number of problems against the gypsies. The gypsies became an obstacle for Bulgaria and Romania to be incorporated in the Sсhengen zone. As a result, the Bulgarians do not feel completely European. They do not have the right for the freedom of movement, which the French, the Germans, the Hungarians or the Polish have. They can stay in Western Europe without visas for three months only.

"The demographic problem in Bulgaria is extremely serious. One may say that Bulgaria is becoming extinct very fast. Bulgarian families usually have one child. Turkish families have two or three children. The children in gypsy families are very hard to count. The country is simply not prepared for such a fast change of national balance.

"As for economic problems, the economic crisis affected Bulgaria very seriously. The gypsies are simply a burden for the national budget. The budget of Bulgaria, just like the budgets of other former socialist states, is unable to maintain so many unemployed people.

"I would not say, though, that Bulgaria will face a large-scale national conflict in the near future. The European Union will not let the fire of national strife burn. However, it will be up for the Bulgarian authorities to deal with the problem," the expert said.