Nissan Qashqai rams into crowd of students in Moscow 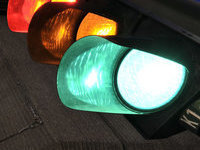 Two female students, who suffered in a terrible car accident in the south of Moscow yesterday,  died at hospital. A Nissan Qashqai vehicle rammed into the crowd of young men and women yesterday at about 16:00 o'clock.  The young people were standing on the sidewalk. The two young women - aged 18 and 17 - died from severe cranial injuries, bone fractures and bruises, a source told Interfax.

One of the victims, Yevgenia Shulga, was a first-year student of Moscow's MIFI Nuclear Research Institute. Doctors are worried about the condition of two other female students (born in 1991 and 1993), who also received serious injuries in the accident. One of them has had her liver ruptured in the accident, whereas the other girl has a spine fracture.

A driver of Nissan Qashqai vehicle lost control of the car on Thursday, September 22, on the intersection of Kashirskoye Highway and Proletarsky Avenue. The car went off the road and rammed into the group of passers-by.

The impact was extremely strong: the people were scattered on the lawn meters around, First Channel reports. Nine people suffered injuries in the accident in total. Two of them have already died. Two others were allowed to go home after they received medical assistance, Interfax reports.

"The driver took a large turn radius and cracked up on a curve. The left front wheel of the car caught the curbstone and ran onto the sidewalk, on which the people were walking," Ruslan Sabitov, an official spokesman for the Police Department of Moscow's Southern District told Vesti-Moscow.

All the people, who suffered in the accidents, were students of Moscow's MIFI Institute. They were walking home after classes.

One of the students, Lana Sorokina, is staying in a critical condition. "The girl has lost a lot of blood. She is going to have two very complicated surgeries. One of them will be on the stomach, the other one - on the head. Lana has a very complicated cranial injury. Another student, Tatiana Tarasova, aged 18, also stays in a critical condition. The girl has a second-degree shock. She suffered fractures of her shin and spine," officials said.

"About 30 people were standing on the pedestrian crossing. I was standing behind others. The green light was about to go on when the car appeared out of the blue. The SUV was trying to make a turn, but slammed at us instead," Roman Orlov, a fifth-year-student of MIFI said.

"Everyone was shocked. I just didn't manage to jump aside. I was the last one whom he ran over. He stopped in about one meter," Orlov said.

According to Life News, the Nissan Qashqai was driven by 37-year-old entrepreneur Valery Kryukov. "According to preliminary information, the Nissan driver was staying in a state of alcoholic intoxication," an anonymous source told the publication.

The Komsomolskaya Pravda newspaper also said, with reference to the eyewitnesses of the accident, that that driver of the vehicle was drunk.

One of the eyewitnesses said that the driver was trying to flee from the site of the accident, but other people did not let him to.

"He ran me over and I landed on the lawn. I was lying on the ground and I could see him getting out of the car and running away. He passed me by," eyewitness Nikita Mikhailenko said.