NATO minimizes the murder of 2,000 Libyans

Despite evidence on the killings of civilians in Libya since the attacks began, the North Atlantic Treaty Organization (NATO), representing the United States, France and the UK in the North African nation, denied being responsible for the deaths of 2,000 people in the city of Sirte alone. 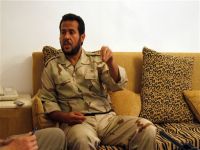 In this town, located 150 kilometers from Tripoli, the capital, there were several days of intense fighting between patriotic troops and the procolonial terrorist forces gathered under the National Transitional Council (NTC).

Colonel Roland Lavoie, the imperialist alliance representative in Brussels, Belgium, said that he is aware of allegations made by the spokesman of the Libyan leader, Muammar Al Gaddafi, Musa Ibrahim, who reported that the last 17 days of NATO bombing have left 2,000 dead in Sirte, as quoted by news agency Europa Press.

"We are aware of these allegations. Is not the first time they occur. Most often it is found to be unfounded or inconclusive," argued a member of NATO.

Ibrahim told Reuters that the Friday night attack alone by the imperialist alliance took a toll of 354 people dead, plus 90 missing and 700 wounded.

For its part, the head of the NATO Military Committee, Admiral Giampaolo Di Paola pointed out in Spain that they will stop acting in Libya when the transition is complete, unless requested by international agencies to continue in the nation.

At the close of a meeting of defense ministers of the alliance in the imperialist city of Seville, they justified the invasion and military actions against Libya because they contribute to "establish the conditions for a political solution to the crisis."

"We are in a time when the end is in sight, but we will not be present in Libya any longer when the transition is finished," said Di Paola.

He added: "We are not going to be there without a necessary role to respond to the request of international organizations."

Ed. NATO is totally sickening the way they speak, as though everyone is stupid and doesn't see right through their lies. Pretentious, arrogant stinking war criminals. Denial is a river in Egypt...try again...your stinking "transition" will never be finished because you and your terrorists are going to hell.