Algeria easy nut to crack for the West 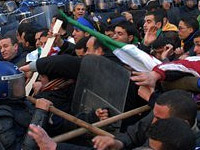 The West has been taking more efforts recently to destabilize the situation in Algeria. This country may become another victim of the "Arab spring." Italy is already looking for a new supplier of natural gas, whereas Western politicians crack down on Algerian President Abdelaziz Bouteflika for the absence of democratic reforms in the country.

Algeria has all chances to become a third country of riots and revolutions after Libya and Syria. Al-Jazeera and Al-Arabiya have already unleashed the informational war against the country, slamming Bouteflika's regime of corruption.

There is another aspect, which has not attracted much attention. At the end of August, after the fall of Tripoli, Italy's chatty Prime Minister Silvio Berlusconi announced an intention to stop purchasing natural gas from Algeria and switch to Libya. This intention looks quite bizarre because Algeria has never given a reason to be considered an unreliable gas supplier.

NATO's military interference does not serve the only option for solving the problem in Algeria yet, but it is quite possible that it will happen some day. The attempt to conduct a "color revolution" in Algeria may turn out to be much more successful than it was in Libya and Syria. The majority of Algerians do not support the ruling regime, and this is exactly what Western special services are going to target.

Algerian special services said that the West was strongly determined to trigger chaos in the country in spite of the fact that Algeria had been trying to resist to the wave of riots in other Arab states, the nation's  L'Expression publication said.

In January of 2011, soon after the events in Tunisia, opposition tried to do the same in Algeria. The situation went intense in February, when tens of thousands took to the streets in Algerian cities demanding democracy and the abolishment of the state of emergency. The latter was put in effect in the country as many as 20 years ago.

Many publications say that the situation in Algeria has gown quiet. This is misleading indeed. The adversaries of single Algeria already set out nationalist sentiments. In addition, Bouteflika's regime does not enjoy popularity among Algerian Arabs. It is enough to say that the authorities arranged a national conference on June 16-16 to discuss the future development of the country. Interestingly, only representatives of the puppet opposition were invited to participate in the conference.

Mohammed Moulessehoul, a well-known Algerian writer, cracked down on the national authorities. One should not listen to those who represent no one. One should listen to desperate young people, the unemployed, all Algerians without exception, the writer said.

Like in many other Arab countries, unemployment is one of Algeria's biggest problems. According to official information, it does not exceed 13 percent of the employable population. Opposition activists give a completely different number - 45% and 65% among the youth. Needless to say that nearly a quarter of the Algerians live below the poverty line. Algeria receives tens of billions of dollars from oil and gas sales.

Opposition activists say that corruption has penetrated into every sphere in the country, including the court system. The Algerian government is running strange politics indeed. The government of the country may eventually deal with 60,000 reservists, who changed the situation in 1995-1999 during the struggle against Islamists. The reservists have already participated in demonstrations of protest before. The government provided very good benefits to the surrendered Islamists, but did nothing for those who made them surrender.

Bouteflika was wise enough not to order to break up the rally of the reservists, as it usually happens with opposition actions. In case Algerian reservists join the opposition, the sitting Algerian government is doomed.

Algerian authorities tried to conduct a dialogue with the opposition, although to no avail. Opposition activists claim that the government simply declares intentions to conduct reforms and does nothing to make it become a reality.

President Bouteflika claims that his slogan about the need to change the constitution is nothing but a declaration. The president is not going to take opposition's interests into consideration and he only makes the decisions that my help him keep the ruling regime afloat.

Bouteflika said on April 15 that Algeria was opening a new page in the implementation of global reforms. Several months have passed but nothing has changed.

There are 26 legal parties in Algeria, but the opposition is unable to act publicly. The Algerian opposition unites with the National Coordination for change and Democracy (CNCD), which holds mass meetings almost every week. The movement unites the entire range of real opposition from moderate Islamists to socialists. This alliance can be very dangerous for the authorities. It goes about liberal human rights activists, parties for democracy, pro-Berber parties, etc - the associations that enjoy the support from the West.

One may say for certain that the regime in Algeria is about to change. The West will keep its nose to the wind to take the situation under control when necessary. The West does not need to take much effort to launch the revolution in Algeria. They only need to give the country a push in the right direction.