Kickboxer kills passer by at one blow for no reason 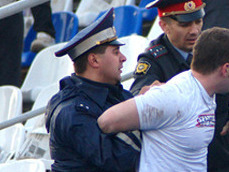 It seems that Rasul Mirzaev now has a follower. A kickboxer from Russia's Saratov killed a passer by at one blow.

Alexander Khromov, 20, a kickboxer, was going home from a nightclub with his girlfriend and several friends. The young man was trying to demonstrate his macho qualities in front of the young lady, so he was picking on casual passers by, The Komsomolskaya Pravda newspaper wrote.

Khromov's friends stared to make jokes about his sports achievements: the athlete had lost several fights. Khromov got angry and decided to prove to his company that he was still in a good shape.

The athlete approached a casual passer by and simply knocked him out, Utro.ru reports.

"It was not even a brawl. Khromov simply called over the man - Viktor Seleznyov - and asked him something like "What are you looking at?" and hit him on the head at hard as he could," Vladimir Alabyev, an official spokesman for the law-enforcement agencies of Saratov said.

The victim was 50 years of age. The man collapsed on the ground and never stood up. The eyewitnesses of the incident - the victim's neighbors - called the police and the ambulance. The man was hospitalized with cranial injuries. He died in four days.

The athlete was arrested on the scene. A criminal case has been filed against the kickboxer on article 111 of the Penal Code of the Russian Federation - "Intended infliction of bodily harm that caused death." The man can now be sentenced to 15 years in jail. Khromov said during investigation that the 50-year-old victim had given a dirty look to his girlfriend. Eyewitnesses said, though, that the athlete attacked the man for no reason.

On August 13, 2011, a three-time martial arts world champion Rasul Mirzaev delivered a lethal blow to student Ivan Agafonov near a nightclub in Moscow. The student died at hospital several days after the incident, without regaining consciousness. The athlete acknowledged his guilt at first, but subsequently claimed that he had hit the victim for self-defense purposes.