An Epitaph for the Triumvirate 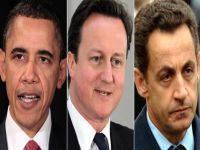 Soon in the vicinity of a town that is inhabited by civilized people, a tombstone will be visible to the naked eye. The epitaph will be clearly seen to many, written in an unmistakable prose and aimed at the fallen scoundrels of a failed invasion of a sovereign desert nation that once bloomed in greenery, but was destroyed by the evil forces led by the triumvirate who now lay buried in the quicksands of destiny and under the tombstone.

"The murderers of innocence that once flourished in a place where humanity thrived, children laughed and women went around with their favourite hobby shopping, lie here'' the epitaph says.

Well mine is not a wishful thinking of sorts when I write this, but a scenario that will happen very likely in the near future as lies after lies of Gaddafi's defeat are getting buried by the facts that are emerging from the battleground. Soon the truth about the real winner will emerge from the dusts of destruction caused by the inhuman bombings of NATO brutes led by the notorious trio of O'Bama (since he says he has Irish ancestry!) Sarkozy and Cameron!

The trio have violated many a charter and many a law which comes under the purview of UN mandates. They have cared two hoots for the opinion of the world in their endeavour towards dismantling a country in their greedy pursuit of sands that are rich in oil.

In their pursuit, however, they forgot a few things. One is that they took it for granted that world opinion will support them forever. However doctored it is, the news about the facts on the ground couldn't be hidden for long. Who the victor is and who the vanquished will very soon emerge. I guess their vision got clouded by the mirage they have been chasing all along.

The ghost of humiliation will come to them in manifolds. Public support is waning in their own countries and people are reading between the lines to understand the truth about Libya. However much the propagandists with their Herculean sorry Goebbelian or Murdochian efforts are trying to hide the truth, it is not happening. Barring a few brainwashed blokes and their counterparts of the other sex who are still dancing to the song of death and destruction, many others are changing the tune of this song to the one that says truth shall prevail.

In the recent past, people's memories being weak, a similar drumbeat occurred when Iraq was attacked under the assumption that it stored dangerous WMDs that threatened the civilized world. How presumptuous they have been all along, these so-called leaders of the so-called 'free world'! First they expected Iraqis to shower them with rose petals when they marched into Baghdad, and now you see for yourself what's happening to this moronic trio!

The most recent statement from the ex-first lady, Hillary Clinton, says it all. She called for a stop to revenge killings from both the sides. Isn't that a plain admission of defeat when she pleads for forgiveness on behalf of the Libyan 'rebels' who are now cornered and are getting justifiable treatment by being sent to meet their 72 virgins in the other dimension? Ah these poor girls! What sins did they commit in their previous births to be the recipients of these scumbags?

Now it is getting abundantly clear that justice and truth will go hand in hand and Libya will once again be liberated from the evil living devils that tried to haunt them!

One episode will certainly come to an end for sure, but at what cost? Many thousands perished, a country stands destroyed. Innocent children who have survived this latest holocaust will remain mentally traumatised for many years to come and for sure, yes, they will not again witness such horrific carnage as that carried out by NATO in their adult lives.

In the meantime and in the very near future, if you happen to visit the neighbourhood of where this tombstone is installed, please do not throw flowers at the departed vermin that lie underneath in the quicksands of destiny!

For they did much harm to our world and vainly attempted to demolish the civility that does exist amongst us. This is the last hurrah for the imperialists, the ex-colonialists and the greedy scavengers of the human flesh also known as Corporations of the Capital kind!