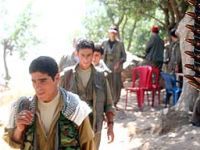 PKK seems to carry less weapons than terrorists in Libya

The Turkish army said it killed about 100 Kurdish rebels in a week of air strikes and artillery bombardment on the bases of the Kurdistan Workers Party (PKK) in northern Iraq. The attacks started in the last 17 ​​days, and were the highest in the last year.

A statement posted on the website of the Army estimated that the death toll was 90 to 100 rebels, and more than 80 wounded. They justify the action after the PKK's violent offensive against its soldiers, on Wednesday last, in which nine soldiers were killed and 14 wounded. Most of the 132 targets that have been achieved by the army were described as "shelters," but included anti-aircraft bases and an armory.

Since 1984, the PKK launched an armed revolt against Turkey and since then the death toll reaches 40 000. The group is termed as a terrorist organization by Turkey, the European Union and the United States. The hopes for negotiations which had increased before the recent general election in Turkey seem to have been frustrated by the increased fighting.

According to a BBC report, Kard Mohammed, a Kurdish member of Iraqi parliament, said the bombing was a violation of international conventions and agreements between the two countries and said the bombing was directed at civilians, leaving seven dead, including children.

"We do not believe that planes cannot differentiate between civilians and military, or a child and a fighter carrying a rifle," said a member of the parliament. On Monday, the 22nd, PKK spokesman Ahmed Denis, said that if Turkey's attacks continue, the PKK could "start a war with Turkey."

Ed. Is it because Turkey is a NATO memeber that they are allowed to bomb terrorists as well as civilians? Why are Turkey's terrorists fair game, but the terrorists in Libya,, who are clearly terrorists, why are they PROTECTED? They are not only protected by bombing the country's defenders, they are armed, advised, reinforced, and given reams of cash to conduct their terrorist activities.

The Turks don't like their personnel being attacked by terrorists, but it's alright for terrorists to attack personnel in Libya?

Why are heavily armed gunmen, who loot, murder, rape, pillage, mutilate, destroy property, kidmap individuals to serve with their forces and intimidate not classified as terrorists by the maniacal scum of NATO? There is an abundance of evidence against these so-called "Libyan rebels." That term is a misnomer that I have grown to hate.

Basically, many of them are neither "rebels" nor are they Libyan. Scores of Qatari terrorists were killed recently in the attack on Tripoli. And there were British and French. What kind of farce is NATO pulling?