What killed the student with the toy car? 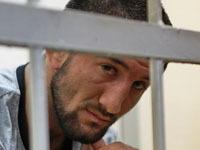 A Moscow court has reversed the decision to release Rasul Mirzaev, the world champion in mixed martial arts, on five-million-ruble bail ($173,000). Mirzaev is accused of killing Ivan Agafonov, a 19-year-old student, Interfax reports. The case received an extensive coverage in Russia, although it is still unclear what exactly caused the death of the student and why the world champion hit the man.

The decision was reversed because of a number of procedural aspects, which particularly included a superficial approach to the consideration of materials.

"Moscow's Zamoskvoretsky Court had a superficial approach to considering the materials of the case. The court did not investigate the possibility for Mirzaev to leave Russia abroad, nor did the court pay much attention to contradictory information about his place of his residence," Anna Usacheva, the press secretary of the Moscow Municipal Court told Interfax.

The question about the measure of restraint for Mirzaev was discussed at Zamoskvoretsky Court on Monday. Mirzaev's lawyer Igor Dergachev was stressing out the fact that his client came to police himself and did not have an intention to run away from justice. The court eventually decided to release the athlete if the latter transferred five million rubles on the deposit account of the court before 6:00, August 25.

At the same time, the details of the tragic night of August 13 still remain unclear. The incident took place near Garage night club.

"The guys were standing near the club talking. Ivan was playing with his remote control toy car. He stopped the toy car near a girl and jokingly offered her a ride. There was Rasul standing near that girl. He turned to Ivan and said: "What do you want?" "I want to give the girl a ride," Ivan answered. "You give me a ride!" Rasul replied back. "Get in!" Ivan responded. I don't know why he said that." Artyom, an eyewitness said.

Afterwards, Mirzaev hit Agafonov in the face. Ivan hit his head against the asphalt surface and lost consciousness for several minutes. When he came to his senses, he asked his friends to take him home. He felt worse on the way, and the friends decided to take him to hospital. The student died several days later without regaining consciousness. He suffered a rupture of the cerebellum during the fall.

There is also another version of the incident. This story is told by Rasul Mirzaev himself and his girlfriend Alla. According to them, the student was trying to pull the girl, whereas Rasul was trying to defend his girlfriend's honor. Mirzaev said that he had hit Agafonov with the back of his hand, not very hard.

The video from the surveillance camera confirms the first version. The footage shows Ivan Agafonov standing and holding something in his hands, most likely a remote control. Mirzaev approaches the students and knocks the man down with one very quick punch.

It is still unknown what exactly killed Agafonov: whether it was Mirzaev's punch or the fall. Some prominent athletes in the world of mixed martial arts acknowledge that it was obviously a tragic, albeit an incidental story.

"It was just a common quarrel, which, unfortunately, led to such a horrible outcome," Shamil Dzhafarov, the president of the All-Russian Federation of Kung Fu said. According to him, it is too early to speak about the extent of the athlete's guilt in the death of the student. "I know Rasul, and I can say for sure that he did not try to use the skills that he has," Dzhafarov said.

Mirzaev apologized in front of the victim's parents during the first court hearings on August 20 and said that he did not want to cause anyone harm.

"As for the blow, it is absolutely obvious that it could not cause much harm to Agafonov," Mirzaev's lawyer Igor Dergachev said. If the athlete is released, he will change and will reclaim his fault morally and financially.

Tatiana Agafonova, the mother of the killed student, said that she simply did not want that to happen to anyone else.

"I don't want such incidents to happen ever again. I don't want a Russian athlete, who defends the honor of Russia, come up to a common guy and simply hit him. His nationality isn't relevant to me," the woman said.