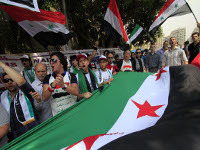 The West is significantly increasing pressure on Syria. On August 18, top diplomatic representatives of Great Britain, France, Germany and the U.S. stated that it was "necessary to increase pressure on the Syrian government" that refuses to heed the demands of the international community and continues to "massively violate human rights ..."

The same day, Barack Obama demanded that his Syrian counterpart resigns: "It is time for President Assad to leave. Leave for the sake of the Syrian people." Apparently he immediately ordered to freeze all assets of the Government of Syria in the U.S. and in U.S. banks. From now on, U.S. citizens are prohibited to invest in the economy of this country, to participate in any transactions with Syrian state-owned companies and individuals associated with the government.

Washington also immediately accused the Syrian leadership that it supported the 2010 "terrorist movement" based in Lebanon and Palestine.

Brussels immediately took this as a signal for the attack and made the following statement: "The European Union has repeatedly stressed that the violent suppression (of the protests) must be stopped ... The Syrian authorities, however, remained adamant," said EU foreign minister Catherine Ashton. "This shows that Syrian regime does not want to change ... the European Union notes the complete loss of legitimacy of Bashar al-Assad in the eyes of the Syrian citizens and the need for his resignation."

She then said that the EU is also preparing to expand the sanctions against Damascus and further develop different ways of countering "the Assad regime." As Secretary of State Hillary Clinton admitted, in July the West has expanded its contacts with the Syrian "Muslim brothers". On August 17, the UN High Commissioner for Human Rights Navi Pillay, "painted a dismal picture" of the events taking place in Syria, including "systematic human rights violations, killings, widespread detention, and torture." The UN Security Council's verdict was to refer the matter to the International Criminal Court in The Hague.

Given this attitude, the evidence of "massive violations of human rights" by the Assad regime in Hama and Lattakia, collected by the Western human rights activists, may deem sufficient to warrant the recognition of actions of the Syrian President as "a crime against humanity." Meanwhile, Western media reported the intention of the U.S. and the EU "to immediately begin work on a draft of a UN Security Council resolution, which in addition to condemning the Syrian authorities for the suppression of the protests will involve the imposition of sanctions."

The next step is a new debate in the UN Security Council on the introduction of the international sanctions against Syria. Russia, that had previously behaved in a very, very strange way when discussing the Syrian issue and joined in previous statements to the UN Security Council condemnation of Assad, faces a difficult choice.

Any wrong move on the Russian part can be used as an excuse to start active actions against Syria. Is the country ready for this turn of events? One of the leaders of the Syrian Committee of National Unity Ali Salim al-Assad answered this and other questions in the interview with "Pravda.ru."

"The Syrian threat does exist. These are not just some imaginary concerns. They are quite real. Remember that back in early August, Foreign Minister Ahmet Davutoglu visited Damascus and demanded that we cease operations against the radical opposition. He brought along an American message that sounded like an ultimatum. For failing to comply with the ultimatum we were virtually threatened with the armed intervention.

However, the minister immediately received a reply suggesting that we are not Libya and are better capable of striking back at those who intrude upon us. In particular, Turkish officials have hinted clearly that if attacked, we will not stop the use of multiple missiles "ground-to-earth," and we are not talking about "Hezbollah" but of our own missile potential, with which we are able to turn Tel Aviv, an ally of Ankara, into ruins.

It is interesting that such a harsh response led to the fact that the anti-Syrian rhetoric of Turkey and the West have died down considerably. However, our potential enemies did not think to abandon their aggressive plans. Realizing that that very second they could not come down on us, Brussels, Washington and their faithful lackeys in the number of Gulf countries have strengthened their subversive activities sending terrorist groups in our area.

The West stepped up the pressure after the army and the police dealt with an armed rebellion in Latakia and Hama that they hoped to turn into a "Syrian Benghazi." However, this does not rule out a possible military intervention in our affairs, which every day is becoming more and more real."

Statements by Obama and his satellites on August 18 are based on the intention to "protect the Syrian people," that is, those opposed to Assad's opposition. What does it look like?

"In Syria, there is a constructive opposition involved in the discussion of the development of the country, and armed, irreconcilable opposition, whose slogans are "Death to the regime," "Alawites to the grave, Christians to Beirut." The latter refuses to engage in a dialogue with the authorities and is trying to thwart the reform for fear of strengthening them. Indeed, in an atmosphere of chaos the reform is impossible by definition. Its most radical leaders like sheikh Arura openly advocate to "throw the Alawite into a meat grinder, and feed the meat to dogs," and are sitting in Saudi Arabia, keeping in close contact with the Western intelligence agencies. These are not empty words. In Hama people were brutally executed just because they somehow belonged to the authorities or simply were Alawite.

These Islamists include not just "Muslim Brotherhood". There are even more radical groups such as representatives of the Lebanese "al-Hariri."

What is the intent of ​​the opponents of Syria?

"They see Syria's independent stance and its alliance with Iran. They understand the strategic position of Syria in the region. No wonder the American experts are already openly talking about the fact that the point of their actions against Libya and Syria is their desire to oust Russia from the Mediterranean Sea. Now TV stations of the Gulf Arab countries show the map of "the future Syria," which depicts several states.

I would like to draw your attention to the fact that the threat has worsened considerably now that Bashar Assad is to carry out the reforms. The meaning of the action against Syria is to frustrate these reforms, and not give an impulse for the development of the country and dramatically weaken us by destabilization. I foresee that our generation clearly will not be bored. The region is moving towards a major war with confident strides.

Does Syria feel the support of its Iranian ally?

"Of all the countries it probably looks the most expressive. Iran has recently allocated to us six billion dollars of free aid, and every day it gives us 250,000 barrels of oil. However, it is not limited to only economic assistance. Syria receives weapons from them as well. There is nothing wrong with that, because we are not taxed by international sanctions. In the near future Iran is preparing for the construction of a military air base on Syrian territory near Latakia, which will allow us guaranteed, fast and steady supply of everything we need for our own defense."

What does Syria expect from Russia?

"Now we are expecting a new UN Security Council meeting and look forward to Russia's assistance. Our main hope is that Russia does not allow making anti-Syrian resolution. The people of Syria are waiting for help from Russia, which should take into account the fact that the West will not stop the strikes against Libya and Syria, and that sooner or later Russia will also have to deal with these intrigues."