Korean peninsula may explode any moment 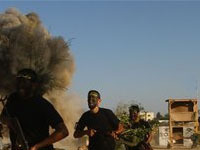 South Korea and the United States launched the 10-day Ulchi Freedom Guardian (UFG) military drills on August 16. Tens of thousands of US and South Korean troops will rehearse the destruction of nuclear weapons of North Korea. A reaction from the North of the Korean peninsula followed shortly. Pyongyang officials stated that the Korean peninsula had never been that close to war as it is now since 1953.

The current exercise will last until August 26 with 56,000 South Korean and 30,000 US troops participating. The latter will arrive from the USA and from the bases in the Pacific region. Officials from seven countries having their representatives in the command of the UN forces on the Korean peninsula will be attending the drills.

In spite of the fact that the exercise is being held to rehearse the liquidation of nuclear weapons, US and South Korean defense officials say that the drills are of defensive character.

"Ulchi Freedom Guardian is designed to enhance the interoperability of the United States and Republic of Korea military forces while enhancing the combat readiness of the alliance. UFG 11 will present the alliance with tough and realistic training events focused on preparing, preventing and prevailing against the full range of current and future threats to the Republic of Korea and the region," said Army Gen. James D. Thurman, Combined Forces Command commander.

The command of the UN troops deployed in the demilitarized zone between the two Koreas informed Pyongyang that the UFG drills were not of provocative character. However, it appears that North Korea was not satisfied with those statements at all.

"The Korean peninsula is faced with the worst crisis ever. An all-out war can be triggered by any accidents,'' the North's ruling communist party newspaper Rodong Sinmun wrote.

Several days ago, NKorean officials conducted negotiations with the US delegation about a possibility to resume the talks regarding the fate of the nuclear program of North Korea. North's officials urged the USA to cancel the current drills to demonstrate the intention to strive for the denuclearization of the entire Korean peninsula. As we can see, neither Seoul, nor Washington agreed to cancel the drills.

In the meantime, the drills are taking place against the background of serious problems. On August 10, South Korea said that the national navy performed three artillery salvos against the North after artillery salvos occurred in the waters near Yeonpyeong Island in the Yellow Sea. Three of the five North Korean shells fell near the disputed sea border, South Korean defense officials said.

North Korean official said, though, that the South took common construction noise for artillery attacks. According to them, there were explosive works conducted in the area for construction purposes. The reaction in the form of return artillery fire was ridiculous, NKorean officials said.

It goes without saying that South Korea believes that the North was lying. Officials from the SKorean administration said that the incident had occurred because of the maneuvers conducted in North Korea near the sea border.

This squabble would not have attracted much attention, if the two Koreas had not been on the edge of war in 2010 after the sinking of SKorea's Cheonan corvette in the Yellow Sea. The South accused the North of the tragedy, but the latter denied everything. The scandal took an international level, and the UN Security Council approved a special resolution condemning the death of the vessel, although the resolution did not name the offender.

In November 2010, North Korea attacked the South Korean Yeonpyeong Island, several people were killed. The North said that it was a response to South Korea's attacks against the North. The war did not occur, but the world was expecting the worst.

Vladimir Khrustalev, an expert for Korea from the Marine State University named after Admiral Nevelsky, said in an interview with Pravda.Ru that the Korean peninsula indeed remains of highly militarized region of the planet.

"Incidents in the region may occur regardless of the will of the administration of either South or North Korea. Such "unscheduled" incidents are most dangerous because a combination of circumstances can be taken as a malicious intent. Local defense official hold enough power to react single-handedly and immediately to situations which they may consider an attack against their country.

"In general, the situation in the region has been improving recently. The South and the North conducted preliminary consultations to resume the talks about the nuclear program of North Korea. North Korean delegations visited China and the USA, so there is some progress.

"As for the current drills, they were planned a long time ago, and the North knew that they would take place. Moreover, North Korea decided to conduct its own large exercise with the participation of ground forces, air force and the navy. The program of the exercise had to be cut considerably because of torrential rains. North Korea still has more than enough opportunities to demonstrate its military power.

"The present state of affairs on the Korean peninsula is partially connected with the events in Libya and Syria. North Korea took NATO's attacks against Libya very seriously because Libya was a country that refused from its nuclear program in the past. Pyongyang became more convinced of the correctness of its course to preserve the nuclear status. Reinsurance is their strategy.

"Not much attention is paid to the fact that North Korea has been developing cooperation with China. Pyongyang understands that China is pursuing its own goals and interests, that China will be trying to promote its interests through Pyongyang. North Korea does not want that to happen because they need contacts with other countries to gain extra resources for the economic development. The crisis in the region does not correspond to strategic interests of the North at this point."