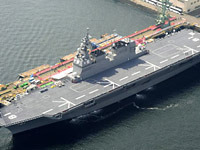 Japanese Prime Minister Naoto Kan stated during the ceremony devoted to the 66th anniversary of Japan's surrender in WWII that Japan would never wage war again. The head of the Japanese government promised to put the most efforts in strengthening peace in the world.

"Our country inflicted considerable damage and pain on many countries, especially the people in Asian nations. Together with all the people, I express my heartfelt sorrow for those lost in the war and pray for world peace and the country's continued prosperity," Kan said.

The Japanese prime minister also vowed to "renew Japan's pledge never again to engage in war and instead to actively contribute to the establishment of ever-lasting peace in the world."

Alexander Kulanov, a Russian expert for Japan, said that Kan's statement was a natural declaration of intentions.

"As a matte of fact, he said that Japan hopes that it would never wage war again. Can we imagine that Japan can come into war with anyone? The country has territorial disputes with some of its neighbors, but all of those disputes can be solved. Let's take the dispute for the Diaoyutai Islands, for example, which is a purely political dispute, like all the rest of them. The messages about unprecedented natural wealth on the shelf of those islands have not been confirmed yet.

"The breakdown at only one nuclear power plant showed that it was extremely difficult to deal with the consequences of natural disasters even in such highly developed countries as Japan. It is very hard to imagine indeed that Japan would dare to wage war against such strong countries as Russia or China. As for South Korea, the situation is more complicated. The two countries are members of the defense alliance with the United States, which does not want to see any sort of crisis between Japan and South Korea. This detail of the US-Japanese cooperation practically excludes the situation in which Japan can trigger off war single-handedly."

Anatoly Tsyganok, the director of the Center for Military Forecasts, said that he had serious doubts about Japan's peaceful intentions.

"First off, one prime minister can not guarantee the actions of the country even in the short-run. Secondly, Japan has been expanding its cooperation with NATO and with the United States in the first place. To crown it all, Japanese officials repeatedly stated that the country could use its Northern District Army to solve territorial disputes with other countries."

Let's assume that all people of Japan, including Prime Minister Kan, appreciate pacifism and decline militarism. Nevertheless, declarations from Japanese officials set one thinking about the true intentions of Japan because the country has been getting less and less pacifist from year to year.

Japan has earned the reputation of the "country surrounded by disputed territories." Tokyo disputes the Kurile islands with Russia and the Liancourt islands with Seoul. The Japanese refuse to return the Diaoyutai to China in spite of the fact that Japan was supposed to do it after WWII.

In September 2010, the relations between Japan and China worsened considerably after a serious incident near the Diaoyutai archipelago in the East China Sea. China has been putting more pressure on Japan during the recent years at this point. Most of the incidents connected with the archipelago are connected with geological exploration and drilling.

One should also pay attention to Japan's defense spending. In 2010, Japan was ranked third on the size of its defense budget. Japan left behind such countries as Britain, France and Germany and followed only the USA and China. Japan has a relatively small army (240,000 people), but it remains one of the most powerful countries in the Asian-Pacific region from the point of view the technological development of the defense industry.

Many of those problems can be solved easily. Japan has reportedly started to establish Marine Corps and commando units. The country is already capable of conducting large landing operations. The Japanese navy has four helicopter carriers, which many experts categorize as light aircraft carriers. Japan's defense power has increased considerably during the recent decade.

In December 2010, the Japanese government approved the new defense strategy for the upcoming ten years. Tokyo refused from the previous "passive and solely defensive strategy" and switched to "dynamic defense forces."

The country particularly plans to increase the number of destroyers equipped with AEGIS systems (from four to six). The underwater navy will grow 1.5 times (from 16 to 22); old submarines will be modernized for further service.

The program stipulates the further development of the inseparable alliance with the United States by means of increasing the reliability of the growing deterrent posture of the United States, including a vital element - nuclear weapons.

Japan's biggest threats are North Korea and China. The program states that China's insufficient transparency in the military field raises concerns not only with Tokyo, but with the regional and international communities. The document also says that the rising of China creates a certain change in the influence of the United States and leads to the considerable alteration of the balance of forces in the world.

As for Russia, the program mentions the increase of Russia's military activities near the borders of Japan. This is probably the reason why Japan intends to strengthen its Northern Army.

To realize the price of Japan's "antiwar promises," one can make a retrospective journey into world history. After the defeat in WWII, the land of the rising sun approved the Constitution under the USA's constraint, which excluded both the existence of armed forces and the participation in overseas conflicts for the country.

Several years passed, and the principal law of the country was broken (again, with the participation of the United States): all types of armed forces appeared in Japan. To get around the law, the country called its army "Self-Defense Forces."

In the beginning of the 1990s, Japan started to get involved in armed conflicts outside its territory in violation of the national Constitution again. Japan sent a group of military medics to assist the countries of the anti-Iraqi coalition during Operation Desert Storm in 1991. Beginning from 1992, Japanese military men could be seen in many hotspots of the world under the guise of peacemaking and humanitarian missions.

All of those events became a prologue for the participation in combat operation conducted by the United States and its allies in Iraq (2004-2006) and Afghanistan. It just so happened that the "peaceful Constitution" of Japan was not an obstacle at all. A word from the USA was enough. US officials asked their Japanese counterparts a favor because the States had to attract as many foreign contingents in the region as possible,

It is worthy of note that Washington supports Tokyo in many international issues, including the problem of the disputed Kurile islands. It is not ruled out that the USA may try to use Japan just like it used its other allies in previous armed conflicts. Is it possible to say that Japan will never be on the war-path against such a background?