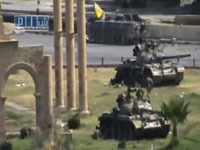 The Syrian government may cease to exist. The clouds thickened over Syria, and the storm is about to break out. Arab TV stations from the Gulf countries hostile towards Damascus have already distributed the map of "Syria after Assad." Unified Syrian state no longer exists. Instead there are several state entities: the Kurdish in the north, Druze in the south and Sunni in the center.

It is likely that in the coming months we will witness the culmination of the Syrian drama. The opponents of Damascus regarded the recent statement by the UN Security Council on August 11 as a carte blanche to persecute Assad.

The Security Council condemned the actions of the official Damascus to restore order in the cities engrossed in unrest, demanding an immediate end of the civilian killings and mass arrests of the opposition leaders.

British Deputy Permanent Representative to the UN Philip Parham stressed that the document was adopted on the basis of the analysis of the situation in Syria. A week earlier the UN Security Council has given the regime of Bashar Assad seven days to fulfill the requirements of the "international community", after which it was to reach a verdict on what to do with Syria next.

Rather significant role was played by the "facts of mass terror against the population of the Syrian regime of Assad" gathered by the human rights activists. Thus, human rights activists pleaded with the "world community" to take stronger action against al-Assad who "continues to destroy his people." News agencies quoted their statement that the Syrian security forces on August 11 "shot indiscriminately at residents of the quarter Baba-Amro (Homs), killing 11 people."

Now Damascus is threatened by far more serious troubles. There are not doubts that the Security Council will take the anti-Syrian statement on August 11. Assad has correctly assessed the situation and refused to make concessions that threaten his country with bloody chaos and disintegration. Negotiations with the Islamists who insisted on the "international community" would mean surrender to the extremists.

He used his allotted seven days to restore order in Hama, the main stronghold of the Islamism in Syria. In another center of conflict, Der al-Zure, special operations against terrorists is nearing completion.

However, this is not important. The main thing is that the West has found a Solomonic decision, by which Russia, an ally of Syria, did not use the veto right when discussing the Syrian issue and condemned the actions of al-Assad against the "opposition." Moscow formally demonstrated its solidarity with those who advocate condemnation of al-Assad. This unleashes the opponents of Syria. For Brussels and Washington it was important to observe the formalities. The main thing is that Bashar Assad now appears as a monster that threatens the "democratic aspirations of the people."

How did the West manage to influence the position of the seemingly faithful ally of Syria? Americans do not reveal all the secrets. However, some of the nuances were voiced by the U.S. State Department official Victoria Nuland. Commenting, she said that there was close coordination with Russia on the Syrian issue. When Russian Foreign Minister Sergei Lavrov visited Washington DC in the middle of July, many topics were discussed.

It is significant that the West continued hostile actions against Syria without waiting for the verdict of the Security Council. Once again it demonstrates that Brussels and Washington originally conceived to hunt down the Syrian "beast." Now, under the pretext that al-Assad continued destruction of bandit groups in Hama after August 4, the EU extended the sanctions against 30 members of the Syrian authorities. In particular, they are banned from entering the EU and their bank accounts in Europe are frozen.

The United States were even more decisive in the defense of the "democracy in Syria". Back on August 9 official Washington announced its intention to declare Syrian President Assad illegitimate, and two days later implemented the threat. Then, the effect was enhanced by the introduction of new sanctions against Syria, which affected the country's largest bank, Commercial Bank of Syria, as well as the telecommunications company Syriatel. All accounts of these organizations in the U.S. banks will be frozen, and U.S. individuals and entities are henceforth forbidden to cooperate with them.

According to the U.S. Treasury, these measures "are directed against the financial infrastructure that supports the regime of Bashar al-Assad in his wrongdoing."

Of course, there is a place for a debate on who deserves legitimacy - Bashar Assad, who is defending his country against armed bandits and the Islamists, or Barack Obama, who succeeded in the destruction of Afghans and Iraqis. It is important that a sharp increase in pressure is observed shortly after Damascus began to actually carry out reforms and prepare the country for multiparty elections.

Now the situation is getting worse for Syria each day. Suffice it to mention the position of Turkey, whose Prime Minister Erdogan calls for more decisive action against Damascus, as "in Syria, the state directs its guns at its people."

Many Arab countries are leaning towards the West. The actions of official Damascus were strongly condemned by the League of Arab States (LAS), whose secretary general Nabil al-Arabi demanded that the Syrian authorities "immediately cease all acts of force and operations of the security forces against civilians." A few days earlier Saudi Arabia, Kuwait and Bahrain have withdrawn their ambassadors from Damascus. A representative of Egypt to the Arab League has warned Syria that if it does not heed the voices of condemnation, it may face a foreign intervention.

However, the situation is not that hopeless for Syria. It is important that Assad has successfully made it through the psychological attack of his opponents. Apparently, after the vote on Libya, he was mentally prepared for the "strange behavior" of his former allies.

The emergence of plans for the division of Syria into "Al Arabia" might embroil the predators who want to break Syria. Turkey under no circumstances will allow the emergence of an independent Kurdish state. Erdogan has his own, distinct from the West, plans for the future of "Syria without Assad."