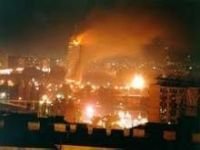 No this is not London. It is Santiago, capital city of Chile, where a demonstration for improvements in education brings together one hundred thousand youths. Hooded groups clashed with police, trade unions attended the march.

Tuesday saw 100,000 Chileans take to the streets of the capital Santiago for a march in defense of public education and quality which were recorded in clashes between groups of masked protesters and police. The demonstration, authorized by the government up to 15 hours (at 16h GMT), left the University of Chile at 10h19 Almagro toward the park.

Some protesters threw shredded papers and released balloons, others beat saucepans with sticks.

There were no reports of incidents in the first two hours of demonstration, even an isolated group of hooded protesters have caused riots in public and private buildings in a pedestrian city center.

The military police intervened and threw jets of water and tear gas against the group, which also was reprimanded by the central marchers. According to the mayor of Santiago, Pablo Zalaquett, the youth group that would have caused the incident would have about 200 members.