Britain falls victim to its own cult of absurd tolerance 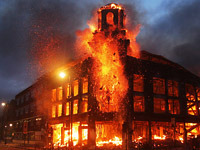 The riots in the British capital continue. The current situation in London bears a striking resemblance to what was happening in Paris six years ago. The flashpoint for the riots in both Paris and London was the shooting of immigrants by police officers.

Mark Duggan, 29, was shot by single bullet in the chest in Tottenham, north London, after police officers stopped the cab he was in. Duggan did not let the officers search the vehicle. One of the officers was wounded in the shootout, Duggan was killed.

A crowd of protesters gathered on the main street of Tottenham on August 6 at night. Hundreds of people, mostly non-white individuals, were protesting against the killing of a young man, a father of four, by armed police officers.

Afterwards, they started throwing "Molotov cocktails" at police vehicles and set two vehicles and a bus on fire. The crowd, in which immigrants were plentiful, honored the memory of Mark Duggan with arsons and pogroms. According to London fire brigades, there were 49 fires in Tottenham the night when the riots started.

In pictures: London riots spread to other cities in UK

The riots spread to London's southern areas, Brixton and Croydon, as well as beyond the British capital - to Liverpool, Birmingham and Bristol.

The riots in Tottenham will go down in history of the United Kingdom. Hundreds of rioters were looting stores and fighting with police. Dozens of police officers were injured in the clashes.

Vyacheslav Nikonov, an expert for Great Britain, the President of Politika Foundation, shared his point of view about the events in London with Pravda.Ru.

"As it happened in France, the positions of right-nationalist parties in the UK are going to strengthen. Cameron will see it again that the politics of multiculturalism has failed. Violent sentiments among immigrants will continue to get stronger too. The current situation in the UK is much more complicated than it was in France. The British immigrants are represented a lot wider than the French ones because of colonial peculiarities. There are many immigrants in the country from both the north and the equatorial part of Africa. The immigrants from India and Pakistan deserve special attention.

"As for the reasons of why it happened, the grounds for that have been forming for decades, when immigrants from former colonies began to settle in European metropolitan cities. Great Britain fell victim to its own "democratic policies" in North Africa."

The last time when Tottenham saw such massive riots was in 1985. However, the past riots did not have the immigration constituent. Great Britain, the country that welcomes revolutions in other states, has become a center of one of such revolutions in a blink of an eye.

The situation in London's non-white neighborhoods remains extremely intense. Many immigrants from former colonies have no education and no jobs. They are ready to protest against manifestations of racism and police tyranny. Those people say that the economic development of the West became possible only after the West turned many other countries into its colonies and enslaved millions of people. Now the West is upset about the fact that several stores in London have been looted.

A crowd of several hundreds of young men plunged the capital of one of the most powerful Western countries into chaos. It does not look possible that British politicians will be able to solve this problem with the help of democratic methods. Britain has fallen a victim to the cult of tolerance that has been taken to absurdity.